Peter Cannon: Thunderbolt Returns at Dynamite
Peter Cannon Thunderbolt is back and Dynamite delivers it with style with a new number one that came out last month.
Dynamite has done a great job with taking old pulp concepts like Lord Of The Jungle and bringing them back with a new look and style, yet remaining true to the concept.  Peter Cannon is no exception.
Issue one opens with the Thunderbolt battling a dragon.  Experiments with nuclear testing caused a  dragon to appear in the sky.  It was subdued (for the moment) by the Thunderbolt and led countries to talks about nuclear disarmament.  We flash forward two years later and Peter is looking miserable as he prepares to be interviewed on another talk show.  The thunderbolt identity is known to the world.  Peter did this to stop people from being hounded by reporters – now finds himself facing the challenges of celebrity and fame.  Things didn’t go quite as expected and Peter seems to be searching for a way to overcome the distractions in his life.
Along the way, new and old acquaintances to the previous thunderbolt series make their appearances, foreshadowing future issues to come.  The conclusion is unexpected and in a good way.  Steve Darnall and Alex Ross managed to capture a lot of the qualities that made the character so intriguing, and manage to build an intriguing mystery to keep you coming back for more.  Jonathan Lau’s Thunderbolt is impressive, but I think my favorite panel in the issue is peter, alone in his dressing, head down and drowned in shadow.  In conveyed his personal happiness better than anything else in the whole issue. It’s the little storytelling things that make or break a good book and that little panel was a nice touch.   A credit should also be shared with Vinicius Andrade for that as well.
Beyond the main story, Mark Waid introduces Pete Morisi Thunderbolt story never before published.  A little bit of that Charlton fanboy in me squeed at reading this retelling of Peter Cannon’s origin.  Who better to tell it then Morisi himself?
Originally, this story was going to be published for DC Comics in the Secret Origin’s anthology that Mark Waid was editing at the time.  Due to unforeseen circumstances, the story never was published until now.  In it you meet Peter Cannon, and get a great re-telling of his origin.  You see him train and master the ancient scrolls to become the Thunderbolt.   The hooded one, the man studying the scrolls before Peter was chosen for them, also appears and begins to become a thorn in Peter’s life, from his trials to the main plot of the first story.
Using his telepathy, the hooded one manipulates Lucifer Barnes into hatching a dinosaur egg and sets it loose in the city.  As the thunderbolt, Cannon foils the plot and vows never ever to be that man again…until next time.
Additionally, there is an essay written by Steve Darnall called Pete’s Dragon, which talks about the influences for the main story in the book which is a fascinating read.
You’d be very hard pressed to find a book this week worth the money paid for then with this.  Two comic stories – including a Peter Morisi comic, a promising first issue and one of the amazing four covers for the book, all in all a great comic worth reading. 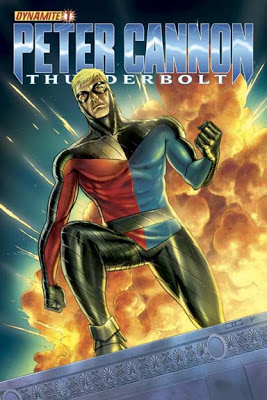