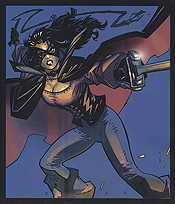 Not counting reprints of the newspaper strips, Tarzan of the Apes has been in the hands of no less than seven U.S. comic book publishers. That’s roughly one outfit per decade. Most enjoyed long and healthy runs by the standards of the time, legal quibbles notwithstanding.

Currently The Lone Ranger is in the hands of Dynamite Publishing. In those same 70 years, John, Tonto, Silver and Scout enjoyed lengthy runs at Western Publishing (Dell and Gold Key, which were two separate companies) and a shorter term at Topps.

The 1970s property Planet of the Apes has been kept alive by comics publishers, initially Marvel and now Boom! Studios.

The Shadow? Five comics publishers, extending the life of the original pulp and radio hero by more than a half-century… and counting.

The list goes on and on. What is it about the comic book medium that keeps iconic characters and concepts alive when their originating media cannot?

Television audiences are measured in units of one million, and very generally speaking you need at least ten of them to survive. Movie audiences are measured in units of ten million dollars and you need lots of those to survive. Mass-market paperbacks, radio drama, pulp magazines and newspaper continuity strips are virtually dead. In most cases, more than just “virtually.”

Comic book audiences are measured in units of one thousand, and these days you can achieve regular publishing with only five or ten such units, depending upon costs and foreign revenues. It’s a lot easier to grab five thousand readers than it is ten million viewers or one hundred million dollars at the box office. All you have to do is appeal to each property’s hardcore audience.

And this is why comics thrive. Appealing to the hardcore, to the most faithful, requires reaching and maintaining a higher standard of entertainment. Us fanboys and fangirls are damn picky. Unlike the movies we do not necessarily demand “name” talent, but we do demand that the writers and artists remain faithful to the source material while telling their stories in a contemporary manner – while being awe-inspiring at all times.

In comics, we’ve got a special effects budget that has no limit and our turn-around time is usually shorter than that of other media, e-books notwithstanding. We can stay on the cutting edge. We are limited only by our skill and our imagination.

Most important, we have fewer cigar-chomping asshole businesspeople mindlessly calling the shots. Well, certainly at those publishers that aren’t owned by major Hollywood studios.

I’d be impressed – very impressed – if I were to see a Zorro television series or a movie that is half as good as the storyline just completed by Matt Wagner and John K. Snyder III in Zorro Rides Again. But, trust me, I won’t be holding my breath.

When it comes to the icons of heroic fantasy, we do it better.

We do it best.