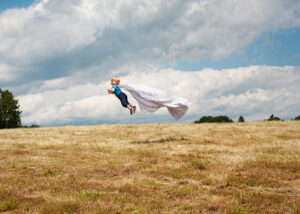 Rachel Hulin is a photographer whose son Henry loves to fly, or at least loves to pretend he is.  So she chose to do a couple of series of photos of him doing so.

Naturally, some well-meaning busybodies worried the child was in some danger during these exploits.  “I never throw him, and I never move him into a place in the frame that he wasn’t in to begin with,” Hulin shares with My Modern Met.

They’re very well done, both the composition of the initial shot and the…post-production work.

She’s doing a book next spring featuring her flying child.  It’s already up on Amazon.