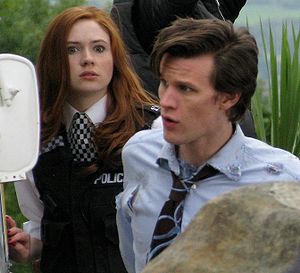 When BBC America teased Wednesday that tickets would be made available for  New York City Premiere of this season’s premiere episode of Doctor Who, there was little doubt they would be highly coveted.  But when the link was released shortly after 2PM on Thursday, it was not expected that the rush of fans would crash the channel’s link forwarding service.  A direct link to the sales page at Movetickets.com was hastily released, and the crush of eager purchasers quickly brought that website to its knees as well.

In a mini-repeat of recent bottlenecks for the San Diego Comic-Con, the ticket purchase system slowed to a crawl, and access was severely limited almost immediately after the links were announced.  The site’s customer service number was jammed to bursting for several hours after tickets sold out as people attempted to see if aborted transactions resulted in a sale or not.

Those who could snag a connection and hold onto it for a full purchase session were able to secure ticket to the premiere of Asylum of the Daleks for the princely sum of eleven cents.  The site would not allow them to give the tickets away for free, so the micro-fee (plus the website’s one-dollar service charge) was their way of tipping the hat to Matt Smith, the eleventh Doctor, while still granting almost free admission to the fans.

The site sold over 800 tickets in approximately twenty minutes, selling out New York’s Ziegfeld Theater, the largest theater they were able to secure.

BBC America has made it clear they’re very thankful that the event was so zealously accepted by the fans, and apologized that the process didn’t go as smoothly as it could have done.  While there’s been no reports of a second showing, the site will be offering contests throughout the week to win tickets.  Announcements will be made via their popular Twitter and Tumblr feeds.

During the information feeding frenzy of the (still unannounced) broadcast premiere of the show, BBC America has also been undertaking a massive publicity blitz for its first original series, the period police series Copper.  Produced by Barry Levinson and Tom Fontana, it tells the tale of one of New York City’s honest policemen in the wild and chaotic year 1864.  Copper premieres this Sunday, August 19th, at 10PM on BBC America.

The Doctor Who premiere will be on August 25th at 6PM at the Ziegfeld Theater.  It is presumed the line has already started.