Noted Comic Writer  Mike Bullock contributed as one of the authors to TALES OF THE ROOK, the first ever anthology set in veteran New Pulp Author Barry Reese’s universe and featuring his best known character, The Rook! 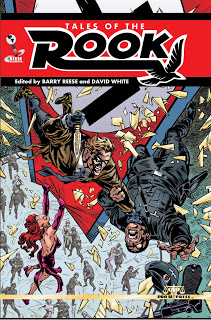 The Anthology debuted in May under the Reese Unlimited imprint from Pro Se Productions and features works by Reese, Ron Fortier, Bobby Nash, Percival Constantine, Tommy Hancock, and Bullock.  Best known for his work on Moonstone’s THE PHANTOM and his own LIONS, TIGERS, AND BEARS, Bullock has jumped feet first into New Pulp as an active member of the New Pulp Movement.  His Runemaster Studios is quickly becoming a fantastic source of New Pulp stories and characters, including his latest creation which saw life first in his TALES OF THE ROOK contribution.  Bullock joins All Pulp for an interview about the mysterious XANDER!

ALL PULP:   Who and/or what is Xander? 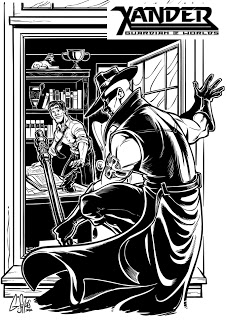 MIKE BULLOCK: He is the Guardian of Worlds, a man, a spirit and a legend. Over two thousand years ago, the first Xander stumbled on an ancient tomb in Capernaum. Inside he found a scroll, staff and armband lying in a sarcophagus. When he read the scroll, a transformation took place anointing him as the first Guardian of Worlds, charged with locating and closing the nether-portals opened from worlds below into our own.

Mentored by the spirit of his dead Grandfather, Xander employs a variety of martial and mystical arts to complete his tasks and prevent those who dwell in darkness from wreaking havoc on Earth.

AP:  What characters/ideas/creators influenced you in the creation of Xander?

MB: I had just finished reading a few of the Rook novels and had sat down with my beautiful wife to watch Fringe when a feeling of incredible creative inspiration came over me. As the show went on, I recall suddenly picturing Xander in my mind, and his totems of power (the armband and staff). I continued to watch the show but something triggered a memory and I recalled a story I’d seen as a child, where a boy’s shadow had a mind of its own, but was attached to the boy’s feet so they were forever linked. While the shadow wanted to do one thing, the boy wanted something else, which created an interesting tension with the character. I took that and molded it into the ‘legacy hero’ model from Phantom, painted all that on my original bit of inspiration and within 45 minutes had what would finally be named Xander: Guardian of Worlds.

AP:  What about this opportunity to be a part of the Tales of the Rook appealed to you enough to introduce Xander into it?

MB: It made perfect sense, since Xander was born out of a moment of inspiration catalyzed by Barry Reese’s work. It’s an honor to have Barry give me the keys to his character and I hope he’s as happy with the outcome as I am. 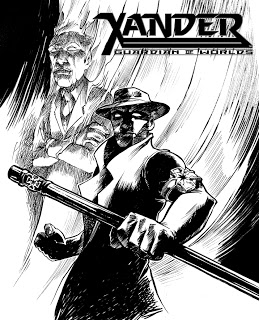 AP: For you, what is it about New Pulp that draws you in as a creator and inspires you to add characters and tales to it?

MB: I fell madly in love with pulp fiction the first time I laid eyes on A Princess of Mars back in the 70s. Since I have this compulsion/need to write and be creative, it seems only natural that I would do so in the New Pulp field. I love what others are doing in the field and just thank God I get to be part of that.

AP:  Any future plans/teasers about what we’ll see from Xander down the road?

MB: Right now I’ve laid the groundwork for his first novel, a series of short stories coming soon from Pro Se. In that, Xander will travel to Texas, New York and abroad hunting down demons, devils and the like in an effort to banish them once more to the hells they crawled from. We’ll learn more about who currently wears the totem, what it means to bear the strain of being the Guardian and maybe get a glimpse of his love life. Oh, and there will be lots and lots of action and adventure.

TALES OF THE ROOK is available at www.amazon.com and www.prosepulp.com in both print and ebook!