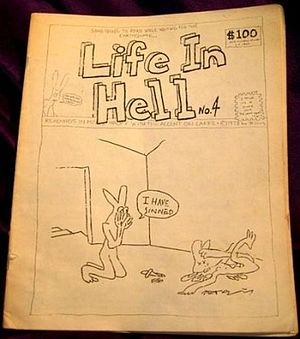 No, the San Diego Comic-Con isn’t ending early… but today is the official end of Matt Groening’s comic, Life In Hell.

After exploring a world populated by “anthropomorphic rabbits and a pair of gay lovers” for over 30 years, “Simpsons” creator Matt Groening is putting down his pen and ending his highly acclaimed comic strip, “Life in Hell.”

The last “Life in Hell,” Groening’s 1,669th strip, was released on Friday, June 15. For the next four weeks, editors will have their choice of strips from Groening’s extensive archive before they close up shop in July on Friday the 13, which seems oddly appropriate.

“I’ve had great fun, in a Sisyphean kind of way, but the time has come to let Binky and Sheba and Bongo and Akbar and Jeff take some time off,” Groening, 58, said by email.

“It’s hard to imagine how the business model that sustained alternative social-commentary and political cartooning for two decades (and is now all but dead) would have evolved had papers not discovered the power of Groening’s strip and its ability to attract readers,” said syndicated cartoonist Ted Rall by phone.

The popularity of “Life in Hell” opened a path for a new breed of alternative cartoonists to appear in alt-weeklies across the country, cartoonists like Tom Tomorrow, Ruben Bolling, Ward Sutton, Keith Knight and Rall. It also showcased the power of sharp, biting cartoons to editors looking to attain and grow a new group of readers.

“Groening is modern cartooning’s rock God, a Moses who came down from the mountain (or the East Village office of the Voice) and handed us the rules we followed,” said Rall.

“Life in Hell” actually earned Groening his big break in Hollywood. It started running in Wet Magazine in 1978, then moved to the now-defunct LA Reader, where Groening worked. The strip eventually made its way to LA Weekly. Its popularity grew, amassing a client list of more than 250 papers, when producer Polly Platt noticed “Life in Hell” and showed it to actor/producer James L. Brooks.

Brooks contacted Groening and wanted him to develop a series of “bumpers” based on “Life in Hell” for “The Tracey Ullman Show.” Groening was a bit apprehensive at the thought of handing over the rights to his characters, so he created the Simpsons to fill the slot.

via ‘Simpsons’ creator Matt Groening ends ‘Life in Hell,’ comic that started it all | Poynter.

This is the final “Life is Hell” strip, which ran Friday, June 15. 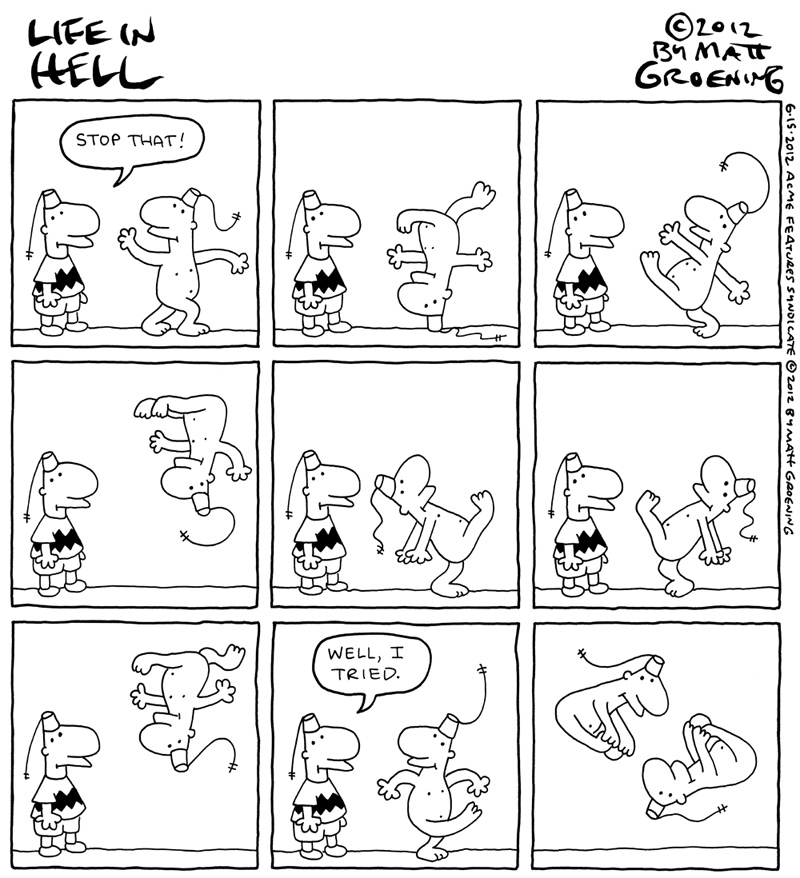