Author Bobby Nash joins Art Sippo and Ric Croxton in the latest episode of The Book Cave podcast to talk his latest novel, Deadly Games. This episode we are trying something new. At the end of the interview we will do a spoiler alert so that everyone who has not read the book will know that everything from then on will be spoilers. If you have read the book and have questions about certain parts, like Ric did, you will now have the answers. If you have not read the book, please stop the podcast when we give out the spoiler alert. This is a book that you will want to reread after hearing the spoiler section.
You can listen to The Book Cave Episode 172: Bobby Nash’s Deadly Games now at http://thebookcave.libsyn.com/
Direct link: http://thebookcave.libsyn.com/webpage/the-book-cave-episode-172-bobby-nash-s-deadly-games

About Deadly Games!:
They played the most dangerous game of all and death was only the beginning… 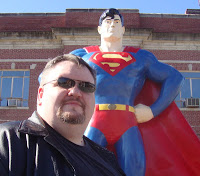