PRESS RELEASE
THE ROBIN HOOD OF THE PULPS 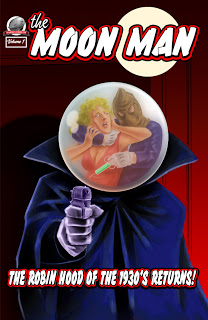 Airship 27 Productions is very excited to announce the release of its latest pulp anthology featuring a classic hero from the past; the Moon Man.
Detective Sgt. Stephen Thatcher is the son of Police Chief Peter Thatcher. Sickened by the effects of the Great Depression on Great City, the young lawman cannot reconcile the rich society elite living the good life while across town the poor of Great City go hungry.  Unable to correct this injustice through the system he represents, Thatcher assumes the role of the vigilante thief the Moon Man by disguising himself behind a one-way Argus glass globe.  In this get up he then proceed to rob the rich and give to the needy via his loyal aide, former boxer Ned “Angel” Dargan.  He is also aided by the lovely Sue McEwen, the daughter of the man sworn to capture him, his own boss, Lt. Detective Gil McEwen.
Created by pulp legend Frederick C. Davis, the Moon Man’s exploits appeared in the pages of “Ten Detective Aces” and were all reader favorites.  “It really is amazing how many old pulp fans still recall this character with so much fondness,” commented Airship 27 Managing Editor, Ron Fortier.  “He was so unique and outlandish, fighting villains and avoiding the police all the while wearing that fish bowl on his head.”
Now he returns to the streets of Great City in five new thrilling adventures written by writers Ken Janssens, Gary Lovisi, Erwin K.Roberts and Andrew Salmon.  Pulpdom’s most bizarre hero is back on the case with a cover by Rob Davis & Rich Woodall and twelve interior illustrations by Ralph Van Der Hoeven.
“This is just kind of book we started Airship 27 Productions for,” added Fortier.  “To shine a spotlight on these classic pulp heroes and showcase them to a new audience.  For many, this will be their first introduction to the Moon Man.  Hopefully while enjoying these new tales, they will be intrigued enough to go find reprints of the originals.”
Airship 27 Productions – Pulp Fiction For A New Generation!
Available from Amazon
(https://www.createspace.com/3809640)
$3 digital download at the Airship Hangar 27
(http://robmdavis.com/Airship27Hangar/airship27hangar.html)
And soon from (http://indyplanet.com/store/)
Share