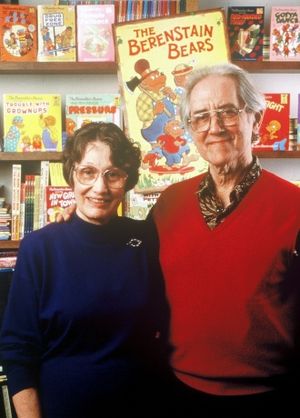 Another of the greats who brought graphic storytelling to millions is gone.

Jan Berenstain, who with her husband, Stan, wrote and illustrated the Berenstain Bears books that have charmed preschoolers and their parents for 50 years, has died. She was 88.

Berenstain, a longtime resident of Solebury in southeastern Pennsylvania, suffered a severe stroke on Thursday and died Friday without regaining consciousness, her son Mike Berenstain said.

The gentle tales of Mama Bear, Papa Bear, Brother Bear and Sister Bear were inspired by the Berenstain children, and later their grandchildren. The stories address children’s common concerns and aim to offer guidance on subjects like dentist visits, peer pressure, a new sibling or summer camp.

The first Berenstain Bears book, “The Big Honey Hunt,” was published in 1962. Over the years, more than 300 titles have been released in 23 languages — most recently in Arabic and Icelandic — and have become a rite of passage for generations of young readers.

Our condolences to their children and grandchildren.