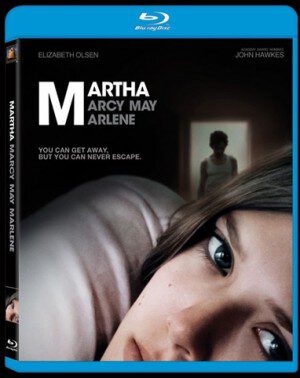 Elizabeth Olsen’s sisters Mary Kate and Ashley can be said to have a cult-like following, who have propelled them from sitcom television stars to formidable fashion trend-setters. They have people who follow their doings without question. Elizabeth’s Martha was similarly following a siren call into a cult setting in the amazing Martha Marcy May Marlene, which was released on disc this week by Twentieth Century Home Entertainment. The fall 2011 release from writer/director Sean Durkin is fascinating in how creepy the overall feel and tone is from beginning to end, even scenes set away from the cult.

Martha got seduced into following a man to the cult and was welcomed by the men and women there and at first, everything in the upstate New York compound seemed so idyllic. There was talk of self-sufficiency, there were communal gatherings as people played music and everyone seemed supportive of one another. They doffed their clothes and swam together. But as you watched, you saw the men ate first, then the women. We watched with horror as Martha was given a drug and was harshly raped as a form of initiation by the leader Patrick (John Hawkes), who renamed her Marcy May. Worse, over time, we saw her more deeply integrated into the society and her ability to question the morality of the society faded to point where she actively participated in the initiation of a new member, telling her “It starts the cleansing”. 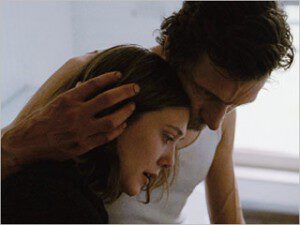 The movie opens, though, as Martha wakes up one morning and leaves the commune, calling her older sister Lucy (Sarah Paulson) for help. What prompted her to finally leave? As the flashbacks intercut with Martha’s reintegration in the world, we find out and learn about the cult’s dark secrets. But just as difficult as it was for Martha to leave, her reintegration home, resuming her difficult relationship with her sister and her new husband, is equally jarring to her. She’s lost, uncomfortable in two different worlds and as the movie concludes, we’re left unsure if she even can resume a normal life. 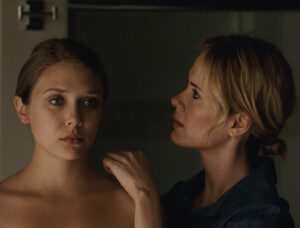 As a result, Durkin tells two fascinating stories: Martha’s and Marcy May’s and neither is a happy one. The editing superbly aids the storytelling and the performances are excellent, notably Olsen and Hawkes, who is making a career out of playing outcasts after this and Winter’s Bone.

The Blu-ray comes with an inviting assortment of extras, including Mary Last Seen, a fifteen short film that Durkin shot to test the mood of the feature, by using his research into cults to show the beginning of the seduction process. There’s also a Spotlight on Elizabeth Olsen; The Story, The Making of Martha Marcy May Marlene, A Conversation with Filmmakers, The Psyche of a Cult “Marcy’s Song” Music Video by John Hawkes, and the Theatrical Trailer. ComicMix was sent the standard DVD which just offers viewers Mary Last Seen which makes for an excellent bookend to the feature itself.