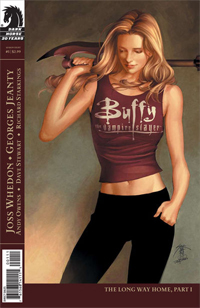 Buffy continues in the top spot, while a double-shipping Walking Dead takes second and third places. Turtles creeps back up to fourth, and Star Trek/ Legion of Superheroes gets off to a very promising start. Further down, Orchid benefits from a rock star contributor, Garth Ennis & John Byrne launch new titles and a remarkable success story finishes off the month.

This month everyone wants to know how DC’s New 52 has affected the sales of everyone else’s books. It’s a little too early to tell, the re-charting DC books have pushed a lot of indies off the charts, but while the indie publishers have a lot less titles charting this month, their market and dollar share have only dropped a little, suggesting that sales are up overall. The next three months will show the effects far more clearly.