NYCC: There and Back Again 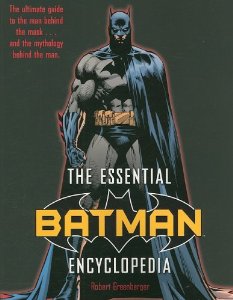 Cover of The Essential Batman Encyclopedia

My time at the New York Comic-Con has come and gone and a good time was had.

As expected, I had countless whirlwind 30-60 second conversations with people, shaking hands, hugging, kissing, and making rather merry. There were some extended conversations and a few business meetings which was nice.

I arrived early enough on Thursday that getting my badge was a breeze and wish more shows were so well staffed. I began running into people I knew the moment I entered the Jacob Javits Center and was delighted. My first appointment was with an editor about a project I can begin talking about next week. We got to know one another beyond the e-mails and phone calls and I think we got along just swell. She then snuck me onto the show floor two and a half hours early so I got a chance to wander and chat with some people who were going to be otherwise mobbed the remainder of the weekend.

Sure enough, once the doors opened to the four-day pass holders and professionals at 4, the aisles quickly filled and moving around was far less fluid. I did make a point of checking booths that had my stuff on display and was pleased to note DelRey had both The Essential Batman Encyclopedia and The Essential Superman Encyclopedia out for the fans. Across the way, Watson-Guptill had Stan Lee’s How to Write Comics out. And just arrived at the TwoMorrows booth were the first copies of Stan Lee’s Universe, where I acted as a consulting editor in the project’s final weeks (and a spiffy looking book it is, too).

Having seen all the publisher booths, I ventured across the way to Artists’ Alley where I managed a mere third of the space before I was summoned to dinner with Paul Kupperberg and Martin Pasko.

On Friday, after a full day at high school, I took the train back in and arrived in time to wander a bit before I met up with Zenescope’s Jennifer Bermel. We’ve been working together nearly a year now on the Discovery Channel graphic novels and had yet to chat face-to-face. We caught up with one another and reviewed the status of the Animal Planet book which we hope to close next week. With luck, in 2012 I will have a chance to edit more of these for them.

I managed to have some quality time with Kevin Dilmore over at the Hallmark booth, marveling at their ornaments for this year and the sneak peeks for next year. While there, we were joined by fellow scribes David Mack, Christopher L. Bennett, Jim Swallow, and Marco Palmieri. This was an unexpected treat since I didn’t think I’d see them at all during the whirlwind visit.

I also had a pretty promising meeting at one publisher with my friend Edu Alpuente. We spoke with the editor at length about something that began gestating between the two of them on Thursday and I was brought in to flesh things out and now a proposal has to be written so one never knows what may happen at these affairs.

With what little time I had left, I blitzed the remainder of Artists’ Alley, which was a wise move since I caught up with quite a few people.

Paul K. and I wandered crosstown for DC’s freelancer party where there was more meeting and greeting, aided and abetted by some terrific food. It was wonderful seeing old colleagues and bosses, capping the con on a positive note.

No, I didn’t see everyone I wanted and I remain disappointed I couldn’t participate in programming. But, I think I packed in enough socializing and business to make the exhausting experience worthwhile.