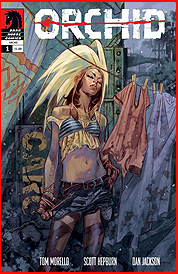 For those of you who experience my weekly hysterical polemics over at Michael Davis World (yep, that Michael Davis), it will come as no surprise that I was looking forward to Dark Horse’s new series Orchid. Sure, new comics come about as often as simians poop, but this one was written by Tom Morello.

Who, you may ask, is Tom Morello? I’ll try not to indulge in musical and political elitism here; there’s always enough of that to go around. Suffice it to say that Morello is one of those activist musicians, and his work shines brighter than most. Best known as the guitarist for Rage Against The Machine, Tom was also in the bands Lock Up and Audioslave. For much of the past decade he’s been a solo act, a.k.a. The Nightwatchman. This latter work is acoustic; the former more punk/new wave/hip-hop. Or, as we in the Whole World Is Watching racket like to say, loud. I play his stuff on Weird Sounds Inside The Gold Mind, I listen to his work lovingly, I watch him on Bill Maher, and evidently we are or have been members of the same union. Indeed, if he was at last week’s New York Comic Con, he and I were probably the only two people among 100,000 to be wearing IWW garb.

What I find really cool about this guy, outside of his work and his politics, is that his mom co-founded the anti-censorship organization Parents for Rock and Rap (say “anti-censorship” and I’m there) and, oh yeah, he’s the nephew of Jomo Kenyatta, the anti-colonialist anti-Communist activist who became Kenya’s first president.

Ahem. So, to get down to the nitty-gritty, is Orchid worth reading?

The simple review is, yes it is. I wish I had worked on it. There’s some rough edges in both the story and in Scott Hepburn’s art, but compared to most of what haunts the racks these days it’s Alex Raymond. Hepburn seems to have been influenced by British guys like Mik McMahon and Ian Gibson; that’s high praise. He’s done a lot of Star Wars stuff for Dark Horse and some Marvel gigs, and his storytelling is as strong as the story he’s telling. In fact, I might track down some of Hepburn’s Star Wars work – as John Ostrander can tell you, it takes a lot to get me to read Star Wars.

The story is post-apocalyptic, an overworked genre that generally lacks the strong emotional point of view needed to make it work. Not so with Orchid. The lead character is a teenage prostitute who protects her family in their struggle to survive in swampland shanties while the rich live above the morass in their fortresses, harvesting the poor (I’d say the 99%, but this number has not yet been established) as slaves, organ providers and sex toys. Morello and Hepburn make it work by sheer dint of their craft and their applied appreciation of allegory.

Morello supplements each issue with a new downloadable song. I’d give you the link, but I’d rather you check out Orchid #1, available at more-intelligently run comic shops and online.

I can’t help wonder if the current Occupier demonstrations all across the nation – now, all across the world – weren’t orchestrated by Morello as a promotion stunt. Given my own background, I’d say that was really cool. Highly doubtful, but really cool. If only that same intensity were to morph into greater exposure for Orchid.