Crisis on Infinite Earths reset the playing field for DC Comics (at least for a little while before it was reset again and again and again), allowing management to refresh their top trio of heroes. Given the groundbreaking work Frank Miller did on The Dark Knight, he was invited to help editor Denny O’Neill essentially reboot Batman from the beginning. In November 1986, fans were delighted with the effort in the form of Batman #404, the first installment in “Batman: Year One”. This not only reset the Darknight Detective and his mythos, but gave publishers the mini-series within a series, which became a template along with the chance to revisit the past with the Year One moniker.

Partnered with artist David Mazzuccehlli, who worked so well with Miller on a run of Daredevil, they helped give us fresh takes on Bruce Wayne, Alfred, and most notably Jim Gordon. Controversially, it also gave us Selina Kyle as a prostitute, something creator shave been trying to paper over ever since. Still, the story of corruption, adultery, redemption, and a man learning to become a hero was gripping stuff.

There’s little wonder then why Warner Premiere decided to adapt this seminal tale as part of their largely successful line of direct-to-video animated features. Much like the source material, this film runs a spare 64 minutes. Everything from the four issues is present and we really see that this is more about Gordon than Batman, giving him some deep roots for the first time.

The adaptation is well handled and the voice work is pretty top notch. What I miss, though, is the fluidity of Mazzucchelli’s artwork, which has become more angular thanks to the animation produced by a Japanese outfit. Batman’s outfit is black and gray, which is when it works best, and the angles and storytelling mimics the comics but the color palette is far brighter, robbing the story of some of its dramatic impact. 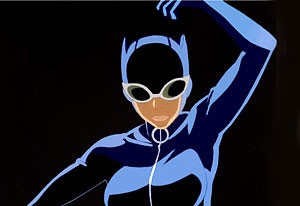 The disc also comes with a Catwoman short (no longer using the DC Showcase umbrella title except on the packaging) with Eliza Dushku and Lilianna Mumy reprising their Selina and Holly Robinson roles from the main feature. Given all the controversy over the portrayal of women in the rebooted DC Universe these last few weeks, it’s interesting to see Selina play stripper being both titillating and a sure fire way to get to her target. The short is swift and entertaining as it demonstrates what a strong character Catwoman can be when handled properly.

The release comes with a variety of extras including previews for past and future Warner Premiere offerings, a digital edition of Batman #404, and some selected animated episodes from the DC Media Library. Two new featurettes are provided: “Hearts of Vengeance: Returning Batman to his Roots” where a variety of creators including O’Neil (but not Miller or Mazzucchelli) talk about the impact of the reboot and the lasting effects of Year One. A second feature, wearying at 39 minutes, has Michael Uslan, O’Neil, Dan DiDio and Scott Snyder talk about Batman through the years and his enduring nature. Snyder, the only contemporary writing the character, should have spoken up more but seemed content to listen to the others. The video nicely includes illustrations to specific scenes and comics referenced during the discussion. It would have worked better had an artist been included for a different perspective.

Overall, this is a strong collection anchored by a terrific story, well told.