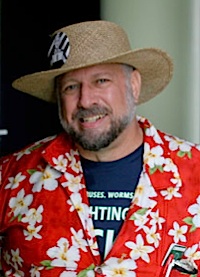 The godfather of eBooks has passed away. Michael Stern Hart, the founder of Project Gutenberg, died on September 6, 2011 in his home in Urbana, Illinois, at the age of 64.

Hart was best known for his 1971 invention of electronic books, or eBooks. He founded Project Gutenberg, which is recognized as one of the earliest and longest-lasting online literary projects. He often told this story of how he had the idea for eBooks: He had been granted access to significant computing power at the University of Illinois at Urbana-Champaign. On July 4 1971, after being inspired by a free printed copy of the U.S. Declaration of Independence, he decided to type the text into a computer, and to transmit it to other users on the computer network. From this beginning, the digitization and distribution of literature was to be Hart’s life’s work, spanning over 40 years. By the time of his death Project Gutenberg hosted over 36,000 items in its collection in 60 different languages, and was frequently highlighted as one of the best Internet-based resources.

Hart was an ardent technologist and futurist. One of his favorite speculations was that someday, everyone would be able to have their own copy of the Project Gutenberg collection or whatever subset desired. This vision came true, thanks to the advent of large inexpensive computer disk drives, cheap bandwidth, and to the ubiquity of portable mobile devices, such as cell phones.

Michael S. Hart left a major mark on the world, and everyone who has ever toiled in electronic publishing, or who enjoys reading anything off of a computer screen, text or comics, owes Michael a great debt. The invention of eBooks was not simply a technological innovation or precursor to the modern information environment. A more correct understanding is that eBooks are an efficient and effective way of unlimited free distribution of literature. Access to eBooks can thus provide opportunity for increased literacy. Literacy, the ideas contained in literature, creates opportunity.

Michael and I corresponded back in the early 90’s, when I was trying to build a commerce system so people who wanted to could sell books online. Michael was always supportive, even though he worked with public domain works and I tried to make a system where authors could be paid, because he knew more eBooks to read, of any kind, was always a good thing for the world.

In July 2011, Michael wrote these words, which summarize his goals and his lasting legacy: “One thing about eBooks that most people haven’t thought much is that eBooks are the very first thing that we’re all able to have as much as we want other than air. Think about that for a moment and you realize we are in the right job.” He had this advice for those seeking to make literature available to all people, especially children: “Learning is its own reward. Nothing I can say is better than that.”

His is survived by his mother, Alice, and brother, Bennett.

Special thanks to Dr. Gregory B. Newby for portions of this obituary.