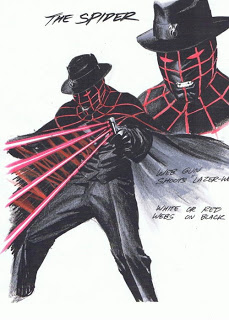 Following up the announcement made on 8/17 that Dynamite Comics will be bringing the Pulp icon THE SHADOW back to comics, Dynamite announced today that fellow Pulp legend THE SPIDER will be joining the company’s growing cast of characters.

Based on the art released thus far, Dynamite’s visual take on the character hews more toward how The Spider appeared in serials produced in the late 1930s and early 1940s by Columbia Pictures than how he has been portrayed in the original Pulps or in other comic adaptations, most recently that done by Moonstone Entertainment.