Derrick Ferguson Suits Up With THE IMPOSTOR 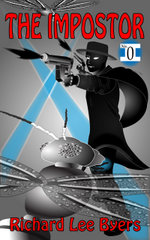 A lot of times I’ll get asked can a superhero be a pulp hero and vice versa.  And I say sure.  Take Batman.  To me, he’s a pulp character who happens to inhabit a superhero universe.  Or the Challengers of The Unknown who to me are also pulp characters.  The lines can get blurry, especially with guys like Thor who is both a legitimate epic fantasy character (or at least he used to be back in the day) and well as being a superhero.  Now guys like Spider-Man, Superman and The Flash, I call them straight up superheroes.
What does all of this have to do with THE IMPOSTOR #0: “Suiting Up” by Richard Lee Byers?  Not much, to be honest with you.  But it was thoughts like that bouncing around in my melon of a head while I read the story.  There’s a lot of New Pulp as well as Classic Pulp for that matter that can also classified as prose superhero fiction.  When it’s done well, it can be just as much fun and as satisfying as a well-drawn or well-written comic book.
The story is as uncomplicated as a glass of milk: Working stiff Matt Brown is on his way home after a hard day of labor when the Earth is invaded by aliens.  But Matt’s Earth is protected by superheroes who valiantly throw themselves into the defense of their planet.  Not all of them survive and Matt himself is captured by the aliens.  He manages to escape and in the process, acquires some of the equipment and powers of the slain superheroes.  Now it’s all up to Matt to take on the invaders.
That’s it.  But considering that it’s an origin story, how much more do you need?  Mr. Byers sets up his character and the premise of the series in a neat, tight bundle that I found highly enjoyable Old School superheroics with a fine Silver Age DC feel to it.  While reading the story I was visualizing the action as if it were drawn by the 60’s Gil Kane.  I dunno if that was the vibe Mr. Byers was going for but that’s the one I got.  And I liked it.
Should you read THE IMPOSTOR #0: “Suiting Up”?  I don’t see why not.  Certainly the price is right.  You can find it here for free.  That’s right, I said, free.  And at 23 pages it makes for a quick, exciting read, just the way all good pulp should go down.  Mr. Byers has promised further adventures of his hero and I’m looking forward to them.
Share