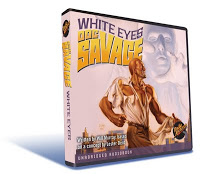 He was a role model during the Great Depression and World War II and a pop icon for the millions who thrilled to his paperback exploits from the 1960s thru the 1980s. Now Doc Savage, the legendary Man of Bronze, comes to vivid life in “White Eyes”, the new and soon to be released audiobook adventure from RadioArchives.com.
In “White Eyes”, a new supercriminal emerges from the underworld. Dressed all in white, his face masked, eyes blank as a blind man’s, he calls himself White Eyes. Who is he? What are his goals? All of Manhattan reels under the onslaught of the Blind Death, a scourge so terrible that innocent people are struck dead, their eyes turning white as hardboiled eggs. From his skyscraper headquarters high above the streets of New York City to the sugarcane fields of Cuba, Doc Savage races to crush gangland’s latest uncrowned king!
Written by Will Murray and produced and directed by Roger Rittner – the same team that created “Python Isle” and “The Adventures of Doc Savage” audio collections also available from RadioArchives.com, “White Eyes” features dramatic narration by Richard Epcar, cover art by Joe DeVito, and two exclusive audio interviews with Will Murray on the continuing history of Doc Savage and the original Lester Dent manuscript that led to the writing of this exciting edge-of-your-seat adventure.
Scheduled for release on July 29, 2011, “White Eyes” will be available as a 10-CD set priced at $31.98 and as a 10-hour digital download priced at $21.98. This Doc Savage thriller is the second in a new line of pulp fiction audiobooks from RadioArchives.com; upcoming releases will feature the classic adventures of The Spider, Secret Agent “X”, and more of Will Murray’s exciting Doc Savage adventures.

RadioArchives.com is one of the largest creators and distributors of old time radio and pulp fiction entertainment in the United States. Specializing in fully restored radio programs, remastered from original recordings, they are known for their outstanding audio fidelity, impressive packaging, and commitment to top quality customer service.

###
www.RadioArchives.com
###
Doc Savage “White Eyes” Creative Team Biographies
Will Murray (author) is the literary agent for the estate of Lester Dent, and the author of over 50 novels, including several posthumous Doc Savage collaborations with series originator Lester Dent, among them “Python Isle”, “White Eyes”, and his latest novel “Desert Demons”, soon to be released by Altus Press.
Roger Rittner (producer, director) has written, produced, and directed specials and multi-part series for National Public Radio, including the drama series “Darkness”, the mystery/macabre series “Midnight”, “The Adventures of Doc Savage”, and the musical special “Charlie Sent Me!” Other radio projects have been heard on stations KMPC, KFI, and KGBS in Los Angeles. Roger created and directed The Variety Arts Radio Theatre, live recreations of classic radio drama, for 10 years at the Variety Arts Center in Los Angeles.
Richard Epcar (narrator) is well known to animation, anime, and gaming fans, having voiced over 300 characters in his lengthy career. He is “Batou” in “Ghost in the Shell” and he’s also featured in a new series from Nickelodeon, “Airbender: The Legend of Korra’. Video game credits include “Robotech”, “Kingdom Hearts”, “Transformers”, “Star Wars”, “Mortal Kombat”, “Modnation Racers”, “Mortal Kombat vs. D.C. Universe”, “Call of Duty: Black Ops”, “Dead Space”, “Star Craft”, “Red Faction Guerilla”, “Command & Conquer”, “Xenosaga”, “Guilty Gears”, “.Hack”, and “Resident Evil”, to name only a few. Animation fans have heard his voice in “Bleach”, “Bobobo”, “X-Men”, “Macross Plus”, “The New Speed Racer”, “Rurouni Kenshin”, “Lupin the Third”, “Digimon”, and “Power Rangers”. On camera, Richard has appeared in many films and television shows, including “Memoirs of an Invisible Man”, “Columbo”, “Diagnosis Murder”, “Guns of Paradise”, “Beverly Hills 90210”, “Matlock”, “Who’s the Boss?”, “Cheers”, “Days of Our Lives”, and “General Hospital” and he will be featured in the film “Broken Spirits”, scheduled for release later this year.
###
White Eyes – Unabridged Audiobook

Written by Will Murray, based on a concept by Lester Dent
Narrated by Richard Epcar
Produced and Directed by Roger Rittner
Cover Art by Joe DeVito
ISBN: 9781610814027