Reviews from the 86th Floor: Barry Reese looks at Indiana Jones and the Army of the Dead 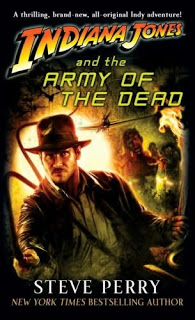 I was thrilled to see a new Indy novel after many years and even more excited that it was being handled by a fairly “big-name” author.

Set during a period where we really haven’t seen much with Indy (the World War II period where Indy worked as a spy), this novel sends our hero after the Heart of Darkness, which is also being pursued by Germans, the Japanese and a Voodoo priest. The search leads them all into Haiti and the Island of the Dead. Along the way we learn about the Voodoo religion and get to see Indy taking on zombies, both of the living and undead varieties.

Unfortunately, while the story wasn’t bad per se, it didn’t really succeed as an Indiana Jones adventure. There were times when the book’s pacing was too slow and things seemed almost pedestrian (even with Zombies and Nazis running around!). There was no real sense of danger or excitement — it was like we were being told about things that were exciting, but without the excitement being displayed in the prose itself.

It was fun seeing Indy during WW II and there were one or two moments where I could see where the author was trying to go… but overall it fell flat. Go and read the Indy books by Rob McGregor. You won’t be disappointed there.