ALL PULP is saddened to repost the news of the passing of Martin H. Greenberg.  Though the name may not be familiar to many, Greenberg gained fame as being one of the most dedicated anthologists of recent years.  Many fantastic story collections that inspired many ALL PULP readers as well as Pulp creators of all sorts, were thanks either in whole or at least in part to Mr. Greenberg. He will be missed. 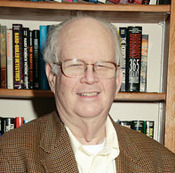 Greenberg took a doctorate in Political Science in 1969, and has taught at the University of Wisconsin – Green Bay since 1975. His first anthology was Political Science Fiction (1974, with Patricia Warrick), intended to be used as a teaching guide, then continuing with a sequence of educational anthology titles under the series name Through Science Fiction. In the late 70s Greenberg began partnering with Joseph D. Olander on more conventional SF anthologies. Early in his career, Greenberg was sometimes confused with Martin Greenberg the publisher of Gnome Press, but the anthologist has stated (at science fiction conventions, and in some of his anthologies) that they are no relation. Asimov suggested that he call himself “Martin H. Greenberg” or “Martin Harry Greenberg” to distinguish him from the other Martin Greenberg.

He shared the 2005 Prometheus Special Award with Mark Tier for the anthologies Give Me Liberty and Visions of Liberty.

In 2009, he was the recipient of one of the first three Solstice Awards presented by the SFWA in recognition of his contributions to the field of science fiction.