With the upcoming June 27 release of his Secret Agent X tale, The Icarus Terror, All Pulp sat down with Andrew Salmon to get the skinny on Secret Agent X and the digital revolution.
AP: Tell us a little about yourself and where readers can find out more about you and your work?
AS: All right. I was born in Montreal, Canada but my wife and I now live in Vancouver. I’ve been writing pulp for more than three years now and really feel at home in the genre. I’ve had the great good fortune to have picked up three award nominations for my pulp work in the last couple of years and am still amazed I actually won a Pulp Factory Award for Best Pulp Short Story in ’09 for my contribution to Airship 27’s Sherlock Holmes Consulting Detective Volume One. Folks interested in my output to date can check out my author page on amazon. It’s got it all. Plus you’ll find almost all of my stuff on Airship 27’s various sites.
AP: How did you become involved with Secret Agent X?
AS: When I first hooked up with Airship 27 I was completely new to the pulp genre having read three or four Shadows and a couple dozen Docs. But I fell in love with the genre immediately and leapt at the chance to try my hand writing it. Well, my inexperience led Airship’s Ron Fortier to assign me a Jim Anthony tale since Anthony was a Doc Savage clone and I’d read more Docs than anything else at that point. So I banged out an Anthony tale and had a ball doing it! So much so that when I was done, I was hungry for more! Around the same time, Airship 27 was re-issuing the titles they had originally published with Wild Cat Books during their brief association and their first Secret Agent X anthology was on deck. Thing was, one of the contributors to that release decided, for whatever reason, to bow out of Airship 27’s re-issue of the book. My Anthony tale had not been released at this point and X was the next book they had on the flight deck. Ron knew I was chomping at the bit to officially become part of what has now become the New Pulp movement and offered me the slot – if I could bang out a Secret Agent X tale quickly. I did . They loved it. And I got the spot! I made my pulp debut with Secret Agent X and have loved the Agent ever since!

AP: Who is Secret Agent X? What makes pulp characters like Secret Agent X appeal to you as a writer and a reader?
AS: X is just a great character! He can be anyone and the fun in writing and reading X tales is to discover where he’s going to turn up next. The mysterious element to the character is what really drew me in. Along with his abilities as a master of disguise, readers are never sure who he really is as his true identity is never revealed. That’s a lot for a pulp writer to play around with and makes X novels and stories a delight to read. X is the Bond of his time and yet has a selfless dedication to duty. He has no time for martinis and fair ladies. He’s got a job to do and he does whatever it takes to get that job done. Also, in a way, he’s the quintessence of what pulp is all about. Very little time is spent on X’s background. Oh, he’s got a regular cast and a love interest, but X tales are all about action, misdirection, gadgets and disguises. Bond meets Mission: Impossible – that’s Secret Agent X!
AP: Digital content has changed the publishing landscape. As a creator, what excites you about digital content? As a reader?
AS: Well, this is the burning question of our time – right across the publishing landscape. The digital world has exploded traditional publishing in a good way. It’s easy to get stuff out there and doing so digitally means you can keep prices down. Everyone is pinching pennies these days and folks are careful about what they spend their money on. People want bang for their buck and tend to stick with content and creators they know to be, in their minds, a sure investment.
However, with digital publishing, readers can now branch out. Whether it be with a tablet, an e-reader or their cell phones thanks to iPulp, content, both good and bad, is now readily available at a great price. Pulp creators and fans have seen the impact the internet has had on creating the New Pulp revolution. Now with the surge in e-readers and the like, it’s not so big a gamble to try something other than whatever is on the Best Seller’s list at any given moment. What once was a $15-$30 roll of the dice can now be had for $3 or even $1 with iPulp. There are a lot of really great writers out there and their voices can now be heard thanks to the digital revolution. Readers can take chances now, branch out and it won’t break the bank. It’s great! I can’t tell you the number of writers I now read regularly that I’d have never heard of if not for the digital explosion. Or, if I’d heard of them, I probably couldn’t afford to take a chance on. No more! Now dabbling is easier than ever and it’s just great to wade into the tidal wave of New Pulp authors and artists. For avid readers, the digital boom is a dream come true! 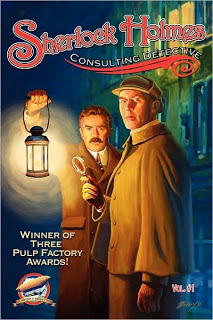 AP: Your Secret Agent X story, “THE ICARUS TERROR” is currently available in print and as an eBook from Airship 27, and soon to be released individually at iPulp Fiction. What can you tell us about this story?
AS: My simple rule for an X tale is to have the thing start pedal to the metal and not let up for a heartbeat. That’s what I did for “The Icarus Terror” and the result is a wild ride. Imagine 1930s New York and an airship festival – airships and blimps hovering over the city, blocking out the sun. Then imagine those ships descending, squeezing between the towering, concrete spires of the city and before anyone can figure out what’s happening, the helium-filled airships begin to explode! How is it being done? Is some evil genius behind it? Is the city being held hostage? Can Secret Agent X get to the bottom of the mystery before more of the airships explode? Talk about bang for your buck! With iPulp offering “The Icarus Terror” for only $1, truer words were never spoken. Edge of your seat thrills await!
AP: Airship 27 currently has three Secret Agent X anthologies in print and available as eBooks with several of those stories soon to be released individually at iPulp Fiction. What’s next for these pulp heroes?
AS: I’ve got a Secret Agent X tale in the third Airship anthology and I’m hoping it will one day make its way to iPulp along with the other X tales they’ve done to date. X is made for this format. The stories are fast-paced, action-packed – just the sort of thing to read on the go or during brief breaks or down time on the job. They will get your heart pumping! As for the future of the great pulp heroes, the sky really is the limit. Back in the Golden Age of pulp fiction, the exploits of these great heroes were great escapism from the everyday. Folks in the 1930s craved these kinds of adventures and nothing has really changed. Action movies, books, video games and the like are still as popular as ever. Pulp fiction and the great pulp heroes of yesterday and today can still thrill while providing that much needed escapism we all need from time to time. Getting pulp tales out in all different formats means that readers looking for a white-knuckle thrill ride can access these tales however they prefer. A Mount Everest of pulp thrills was compiled during the heyday of pulp fiction and millions of readers enjoyed the terrific exploits of these timeless characters. Most of that stuff is becoming available for today’s readers. But, more importantly, a sister peak is being compiled of New Pulp tales, characters, exploits with a modern sensibility, currently created by talented writers and artists for today’s readers. It’s all breaking at the same time. Tons of great reading you do not want to miss! Whether you’re an old pulp fan or someone coming to the genre for the first time, you will find something you like. I guarantee it. Get your feet wet digitally if your wallet is a little light. Try an Airship PDF for $3 or an iPulp tale for $1. For less than the cost of a cup of coffee, you’re in for a real treat! Once you see what a wonderful reading experience one can have with pulp, you can upgrade to printed books to stock your library if you want or fill up the memory on your tablet with as much pulp as it’ll hold. You won’t be sorry.

AP: Any upcoming projects you would like to plug?
AS: I’m currently working feverishly on a pulp novel featuring German pulp heroes called All-Men: The Shadow-Line. The book, if I can ever get the darn thing finished, is going to be something very different and, I hope, very eye-opening for pulp fans. I’m going out on more limbs than I can keep track of but I’m risking the fall in the hopes of providing readers with a reading experience they’ve not encountered with pulp to date. The novel is taking up almost all of my writing time these days but that doesn’t mean I don’t have other irons in the fire. I’ve contributed an easter-egg laden, hardboiled detective tale for an anthology Airship 27 is putting together featuring a PI named Rick Ruby and that was a lot of fun. I also collaborated with Mark Halegua crafting the first tale with his hero, the Red Badge, which is forthcoming as part of Airship 27’s Mystery Men & Women Volume Two which should be out before the end of the year. There are a lot of other things on the horizon both with Airship 27 and Pro Se that I’m not at liberty to talk about at the moment. Let’s just say that the pulp world hasn’t seen the last of me yet and leave it at that. I’m having a ton of fun writing pulp and it’s my hope that readers are having as much run reading what I’ve churned out so far. Hang on to your fedoras folks, you ain’t seen nothing yet!
AP: Thanks, Andrew.
For more information on iPulp Fiction’s offerings, please visit www.ipulpfiction.com
For more information on Airship 27 Productions’ offerings, please visit www.gopulp.info
Share