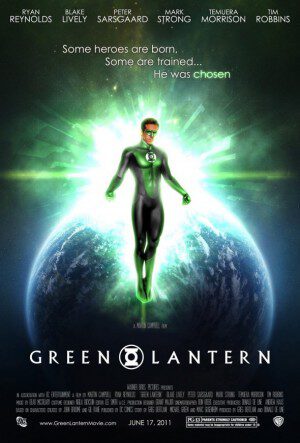 Analysts gaze into a crystal ball and make educated guesses about how well a film will open. This week, they used a Power Battery instead and suggested that Warner Bros’ Green Lantern would open between $50-60 million. Box Office Mojo just released the numbers and they are estimated the Emerald Crusader brought in $52.7 million, placing it at the lower end of the spectrum.

For comparison purposes, a month earlier, Thor, one of Marvel’s ongoing series of films, opened with a god-like $65,723,338. GL’s modest numbers certainly have to be disappointing to both Warner and their DC Entertainment division. Mixed to negative reviews from the mainstream media no doubt blunted the film’s opening weekend so the better indicator of its changes will be next weekend when we gauge how much of a drop off there has been. This would be the “word of mouth” barometer and a chance for the fans to spread the gospel or take in a repeat showing.

No doubt 3-D fatigue is also a factor in the lower numbers despite being shown on approximately 2700 screens. That recent trend has shown that 3-D may actually be once more a fad and not a new form of entertainment. The jury remains out on this issue.

Speaking of Marvel, their X-Men: First Class nabbed an addition $11.5 million in its third weekend, totaling a pleasant $119.9 million, almost ensuring it a sequel order any minute now.

Warner no doubt is taking comfort in the wild success of The Hangover II, which earned an additional $9.6 million for a cumulative total of $232.7 million after four weeks.

The Ryan Reynolds action flick, directed by Martin Campbell, was made for an estimated $150 million with a nearly equal amount spent on marketing and promotion.  It was plagued with a weak debut trailer in November that meant a new plan needed be created. The spring buzz turned around after several minutes were shown at Wonder Con and a steady stream of new trailers helped reshape public opinion.

Box Office Mojo Editor Brandon Gray has written that any opening short of $70 million would make a sequel questionable despite Warners already asking for script treatments. Obviously, worldwide box office may turn the tide as an increasing percentage of a film’s performance is now coming from overseas markets.