The Lion King Arrives in Blu-ray and 3-D 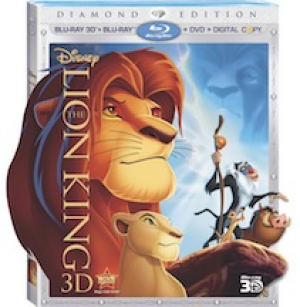 Disney has done such a spectacular job with their upgraded high definition releases of their classics through the years so each announcement is most welcome. Personally, I question the value of a 3-D home video release but it’s nice they have the option for those interested. Here’s the official release:

BURBANK, Calif. (May 26, 2011) — Simba, Mufasa, Nala, Timon and Pumbaa are back and better than ever this fall when Disney’s The Lion King roars into theaters and homes in breathtaking 3D. A special two-week theatrical extravaganza kicks off Sept. 16, 2011, showcasing the Oscar®- and Golden Globe®-winning film on the big screen in Disney Digital 3D™ for the first time ever, and its highly anticipated home entertainment debut kicks off October 4, celebrating the Diamond Edition release of the epic movie “The Lion King” in high-definition Blu-ray™ and Blu-ray 3D“The Lion King is the best-selling home entertainment release of all time—and this is The Lion King like never before,” said Bob Chapek, president of distribution, The Walt Disney Studios. “The all-new 3D format immerses viewers in the epic settings and puts them face-to-face with these beloved characters. We’re showcasing one of the all-time favorite Disney movies in theaters and making it available in Blu-ray hi-def and in Blu-ray 3D—it’s the must-see, must-own title for everyone.”

Nearly a decade since The Lion King last appeared on the big screen, the upcoming theatrical release invites new generations into the “Circle of Life.” The two-week, 3D-only presentation is a planned wide domestic release—the biggest since the film’s 1994 debut—and the film’s first-ever 3D release.

The Blu-ray debut marks the first time The Lion King has been available in any form since 2004. Featuring pristine high definition picture and sound, the Blu-ray creates an incredible at-home experience with a host of picture and sound enhancements, interactive features and bonus content, including a new set of hilarious animated bloopers.

The Lion King: Diamond Edition home entertainment release will be available from the Disney Vault for a limited time only beginning October 4 as follows:

And the one-disc DVD Edition will be available on November 15.

The Lion King, first released in 1994, won the Oscar® for Best Original Score (Hans Zimmer) and Best Original Song (Elton John/Tim Rice “Can You Feel the Love Tonight”), earning Golden Globes® in both categories, as well as for Best Motion Picture—Comedy or Musical.

The film inspired an immensely popular, Tony Award®-winning Broadway musical, which is currently featured on stages worldwide. It became the seventh longest-running musical in Broadway history in January 2011.