ALL PULP INTERVIEW –MD JACKSON, ARTIST
BY GUEST COLUMNIST JOSHUA REYNOLDS
AP: Let’s start off with an easy one…who IS MD Jackson? Is he man? Mystery? Monster? None of the above?

MDJ: Well, that depends on who you ask. If you ask my wife she would probably agree with ‘monster’, although ‘bear’ would probably fit better — you know — big and furry, sometimes cuddly and sometimes grumpy, particularly when he’s hungry (although I have heard the words ‘sexy man’ come out of her mouth and George Clooney was nowhere to be seen so…). I am a human (well, humanoid at any rate) and I fall quite definitely into the male camp as far as gender goes, so, yes I am a man. Logically I am a mystery to people who do not know me, but perhaps not one that anyone cares about. Not like the real mysteries of life like; where does the time go? or Why does only one sock come out of the dryer when you know you put two in?
AP: Your work has a real pulp-tastic vibe to it…was that intentional? Is it a conscious style choice, or is your style more organic?
MDJ:The pulp influence in my work is very intentional. One of the things I love most in the world are old pulp magazines. I love everything about the pulps but particularly the cover art. Those covers virtually had to scream from the newsstand PICK ME! PICK ME! That is the kind of visceral impact I can get behind. I figure, why be subtle? Hit people where it hurts. Make them notice you. I know a lot of people get turned off by that, but I’m not Thomas Kinkade. You want pretty cottages then you might want to avoid my website.
AP:Is it true you’re Canadian? If so, how exactly is British Columbia ‘British’? Who’s your favorite Prime Minister?
MDJ:Yes, I was fortunate enough to be born within Canada’s borders. There are parts of Britisch Columbia that are very British, more British than British — Victoria, BC on Vancouver Island for one — but then there’s other parts that are very German. Some places are very Swiss or Ukranian and there’s even some parts that are Hungarian. On the whole the province is very Old World-y and European-y, except where it is Native Land, then it’s not European at all.
My favorite Prime Minister was John A. MacDonald. He was a drunken old Scots reprobate and was a lot of fun. This one time we went on a bender together. It lasted so long the Toronto Star actually wrote a story that he’d died. We laughed our asses off about that one, I can tell you.

AP: What about influences? What artists (if any) do you (did you) take inspiration from?
MDJ:I’m easily influenced. I cave to peer pressure like a house of cards. Artistically, though my biggest influence is Frank Frazetta. Mind you, all fantasy artists are influenced by Frazetta whether they admit it or not (and if they deny it then they’re big old liars).  Boris Vallejo, obviously and James Bama. Remember those old Doc Savage Paperback covers? Love that stuff! All of them were influenced (as am I) by pulp artists like Walter Baumhoffer, Rafael DeSoto, Norman Saunders and Alan Anderson to name but a few.
AP:Still on the subject of inspiration, what other wells do you draw creative waters from?
MDJ: Actually we don’t use a well. Our water comes from a tap. Just because I’m a Canadian doesn’t mean I’m not a modern guy!
I am also inspired by the architecture of antiquity, ancient ruins, ancient armour, castles, period clothes — these things inspire me. Photography does as well, particularly for lighting and mood. And, of course, hollywood movies with their ubiquitous CGI and 3d spectacle. I used to take inspiration from comic books as well, but not so much anymore.
Really detailed pen-and-ink work is inspiring. I could stare at the work of such artists as Windsor McCay, Willy Pogany, Franklin Booth, or Joseph Clement Coll for hours. 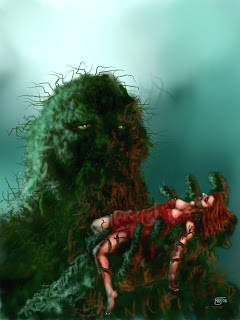 AP: You’re Canadian so you should know this…is the Wendigo real?
MDJ: You’re darn tootin’ she’s real! She was my sister-in-law! (did I say that out loud?)
AP: Are you a life-studies man, or do you free-style it?
MDJ: I go back and forth. I can’t afford models per-se and it is hard convincing people to pose for you (but it can be fun if it’s the wife and there’s lots of costumes and props involved) but the final product is always better (I think, anyway) if there are some solid references, particularly for period clothing and genre specific items like weapons and such.
AP: That’s a suspicious answer if I’ve ever heard one. Are you a wendigo?
MDJ: I said Sister-in-law… not sister, sister IN-LAW…!
AP: Describe the ‘MD Jackson Process’ for us…how do you approach a given project?
MDJ: Once I’ve accepted a commission the first stage is usually PANIC! “How am I supposed to do this? Am I insane? I’m not talented enough to do this! What was I thinking?” that sort of thing.
Once I calm down I usually sit down in a big comfy chair with a cup of hot tea and my low-tech equipment: A 9″ X 12″ sketchpad and and H or H2 pencil. I will just turn of my brain and let my had do all the work. I start with thumbnails for composition and I will do anywhere up to a dozen or so little sketches until I get two or three that I think will work. If I’m working for someone else I will work these thumbnails up into more detailed sketches and let the client see and decide. If it’s just for me I’ll usually just pick the one I like best and go with it.
After the client chooses one layout then I’ll start collecting references, shoot some photos if I have to, and start narrowing down a colour scheme. After that I start working. I paint digitally using Corel Painter X. I usually work background to foreground and work on each figure individually, blocking in basic shapes and colours and then working each figure with finer and finer detail until it is done. Then I sign it and ship it off.
Easy, right?
AP:  Are you certain you’re not a wendigo? That sounded like a wendigo answer. I’ve heard they’re tricky…
MDJ: Okay, I’m sorry I called my sister-in-law (my EX sister-in-law) a wendigo. She’s not really a Wendigo. A Wendigo eats people. My sister-in-law only ate Snickers bars.
AP:  Black and white or full color? What’s your preference in regards to your own work?
MDJ: I love working in colour. I started with a somewhat limited colour palette but I have recently opened up and begun producing more colourful images. Just right now I’m working in black-and-white which can sometimes be unforgiving. It certainly makes you appreciate the colour when you are forced to work without it.
AP: How’d you get your start? What’s your origin story? Bitten by an artistically inclined spider? Bathed in the fumes of a paint factory? Are you a mutant? Possibly a mutant wendigo?

MDJ: I might be a mutant. I do have freakishly abundant body hair. I’m not a Wendigo. I don’t eat people. I prefer cookies.
I have been drawing for as long as I have been able to hold a pencil. My mother was a landscape painter. I preferred pencils and pen-and-ink for the longest time. I dabbled with oils and water colours but couldn’t find a way to make them medium really sing until I discovered digital painting. My mind was blown and there was no going back. Digitally I could do all the things I wanted to do with brushes but just couldn’t.
Aside from that there is no magic or mutant powers — I just do it as best I can and then try to do it better next time.
AP: Which piece of work of yours has been your favorite? Least favorite?
MDJ: Like most artists my favourite piece is usually “the next one”, but I do have a few pieces that I have a vertain fondness for. IN THE SWAMP is one of my favorites. I like the look in the swamp monster’s eyes. I also love a piece called MARRIED TO THE WIND because I did that for my wife. I have a piece I called GENERIC WESTERN COVER in which I tried to emulate James Bama’s style, which I think I sort of captured. I also have a piece simply called SPACE which encompasses a lot of what I love about classic space opera illustration. Oh yeah, I also did the cover art for a book called DRACULA LIVES! That one turned out alright.
I would prefer not to talk about my least favourite works. If I hadn’t had the temerity to accept money for them and if they weren’t despoiling the covers of some otherwise fine books and magazines, they would have been dumped down the bit-bin never to be seen again.
AP: I understand you also do a bit of writing on the side…give us the lowdown.
MDJ: I don’t write all that much. Jack Mackenzie, on the other hand, he writes a lot of pulpy, fast-paced, action-y stories and he’s been published in Encounters Magazine, Neo-Opsis Magazine, Dark Worlds Magazine and in the anthologies SWORDS OF FIRE and SAILS AND SORCERY among others. Mind you, he’s a fairly unpleasant character. He is boorish and insulting and he smells. He says he is bad tempered because he’s written four novels and none of them have been published yet.
I think it’s just because he’s a bastard.
AP: Where can we find you on the wide, wild interwebs?
MDJ: I have three main online galleries:
www.mdjacksonart.weebly.com
http://mdjackson.deviantart.com
http://community.imaginefx.com/fxpose/mdjacksons%5Fportfolio
Visit them at your peril! 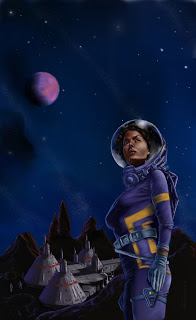 AP: Consider this last bit your designated shilling space. Snake-oil it up and tell us where we can give you money…
MDJ:If you give me money I will make you a nice picture. I’ll do a neato cover for your book or magazine or website, I’ll do a portrait of your favourite child/parent/great aunt/kitty cat — I’ll do anything except for a Velvet Elvis or dogs playing cards. There’s already too many of those in the world.
Contact me at one of my galleries and we can negotiate.
Share