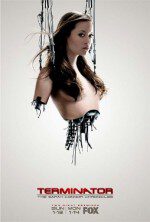 According to [[[Terminator: The Sarah Connor Chronicles]]], Skynet went fully live two days ago on April 19, 2011 and will begin its attack against humanity sometime today, in an attack the few survivors will call Judgment Day.

Here’s a highlight reel of what to expect:

With #Skynet a trending topic worldwide the last few days on Twitter, we fear the worst. Since the series was canceled prematurely by Fox, we won’t actually know until later today if Sarah Connor, John Connor, Cameron, and Reese were able to stop the machines until it&^%$JKiuyfgg