Sometimes great minds think alike and even simultaneously.   Two noted modern pulp writers within hours of each other sent ALL PULP an email, one asking to do an interview, the other wanting to submit an essay.  Each of these writers wanted to use these vehicles to dig deeper into their own creative processes, to pull back the shade and show where some of the influences for their characters and some of the reasons behind creative decisions they made came from.  The writer who requested the interview was Mike Bullock and that interview was posted yesterday on MOONSTONE MONDAY.  The writer who’d written the essay is ALL PULP’s very own Barry Reese and it will be posted below to officially kick off BEHIND THE VEIL.

In the coming weeks, Perry Constantine, ALL PULP guest columnist will be contacting some pulp creators with a list of interview questions, not the basic questions, but some real get tough and deep type questions about relationships these writers have with particular characters they have created or have written.   If you prefer, however, to do an essay as Barry did, then please do so and send that to allpulp@yahoo.com  Both interviews and essays will be featured in BEHIND THE VEIL.

Behind the Veil: The Rook & Me
by Barry Reese 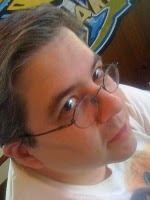 I was very young when my parents divorced. As a result, most of my memories of my father are ones where he was either drunk or making my mother cry, or both. He did get me on some weekends, though, and there are two very fond memories that I have of him: on Friday nights, he would let me stay up far too late to watch one of those B-Movie shows at midnight; and he always had those Bantam pulp reprints of Doc Savage and The Avenger lying around. From the former, I think I gained my appreciation of bad cinema and from the latter, I gained a lifelong appreciation for heroes that many of my peers had never heard of. While I could speak comfortably to them about the nuances of Batman, Spider-Man or Nova, I was always conversant in the more obscure realms of Doc Savage, The Shadow, Justice, Inc. and Conan the Barbarian.
Eventually, my father moved to Florida and his appearances in my life became more infrequent.  In 1985 (when I was 13 years old), he showed up unannounced at the house I lived in with my mother and stepfather (the man whom I always think of as my “real” father). He brought me a huge supply of paperback books and spent a couple of hours with me. He made an off-color joke about a girl in my class that I mentioned having a crush on and then he hugged me and said he’d see me again soon.
It’s 2011 and he’s yet to keep that promise.
I grew up, suffered through the typical high school angst, found my future wife and a career as a librarian. Eventually, I kind of stumbled into a career as a writer. One of my creations, the one that I’m most known for, was a pulp-style hero known as The Rook. In this series, young Max Davies loses his father when he’s a young boy and grows up thinking that he has to somehow ensure that others won’t suffer the pain that he did. Eventually, he discovers that his father has controlled his growth, even from beyond the grave, transforming him into the man that he becomes. He’s tormented by conflicting feelings upon encountering his father’s ghost: does he hate this man who has shaped him or does he desperately want his approval? In the fictional world, their relationship heats and cools repeatedly before they finally bury the hatchet as his father is symbolically killed by the son and vanishes into the afterlife, finally at peace.

I never saw The Rook as any reflection upon my life until a reporter doing a story on me kept going back to my relationship with my own father. And then I wondered: did this man who hasn’t seen me in over 25 years still control me? Is The Rook some sort of grotesque parody of my own personal relationship with a man who in some ways is dead to me?
I sent my father a few of my books and he emailed me back, saying he loved them and that he appreciated how I used some of the heroes he used to admire. He also said he loved me. I thanked him for the comments on the books but I’ve never said I love you back. 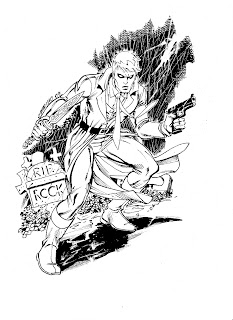 Just as in The Rook, the grave isn’t always the end. Shortly after my stepfather passed away, my genetic father re-entered my life, through the magic of the Internet and Facebook.   He sometimes posts on my wall and tells me how proud he is of me.
I sometime wonder if it’ll take his death for me to put all the complex issues to rest.
If he does die, will I attend his funeral? Seems strange not to but at the same time, I haven’t seen him in 26 years… how do you vanish from your child’s life for so long? Now that I’m a father, I (like Max in The Rook series) can’t imagine turning my back on my own flesh and blood. I’d gladly die for him… and can’t fathom simply walking away from him.
Sometimes I want to reach out to my father and embrace him but then I think that maybe I just miss my stepfather.
Sometimes I don’t know what I want.
Share