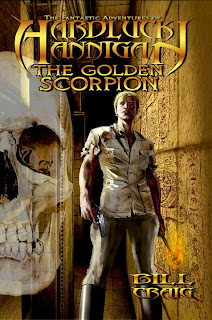 AP: Welcome back to ALL PULP! You’ve been busy since the last time we talked. What have you got going on right now that you’d particularly like to bring to the attention of our readers?
Bill:  Well I just finished off a short story for a future Airship 27 book, and I am in the home stretch on the next Hardluck Hannigan book: The Golden Scorpion, and then I was just invited to submit a story for a new weird western anthology, Showdown At Midnight, from the same people who did Six-Guns Straight from Hell.
AP: What do you like to read, and what have you taken from it over the years? Is there any writer or character in particular that inspired you and helped you shape your own narrative voice?
Bill: I read a lot of mystery, high adventure when I can find it, and westerns.  Doc Savage and the Shadow were inspirational and I used to be able to set down and read one of them in a couple of hours.  Of course I was younger then.  Also Don Pendleton’s Executioner and Jerry Ahern’s The SURVIVALIST both taught me a lot about making my characters human enough for the readers to care about.  Don and Jerry both mentored me to a great degree and I still keep in touch with Don’s wife Linda and with Jerry and his wife Sharon.
AP: Describe for us the writing process. Is there a particular time of day that you find more productive? Do you listen to music? What sort of an atmosphere do you like to work in?
Bill:  I usually write from about 9:30pm till about 11:30pm after I put my 5 year old to bed.  When I listen to music, it is either Jazz or a Soundtrack.  I like when the house has quieted down for the night and actually find rainy nights in the summer when I can open the patio and listen to the rain hitting on the tin roof.  Great atmosphere!
AP: How do you define “pulp?” Everyone seems to have somewhat different ideas about what it entails. What would you include or exclude from the definition? 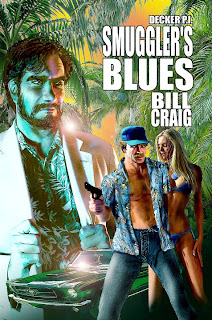 Bill:  To me “pulp” defines anything that takes place before 1950.  After 1950, it becomes under the label of  “High Adventure”.  Jerry Ahern’s The Takers is a good example and of course the Gideon Hunt books.  But Doc Savage and the Shadow both ran to near the end of the 1940s so I feel the forties need to be included under the definition.  Anything before 1900 falls under the heading of Historical.
AP: Obviously, pulp in the 21st century isn’t going to be exactly like pulp in the 1930s. There’s a whole different perspective, and more than half a century of scientific and cultural progress. In what way do your stories remain true to pulp’s origins, and in what ways do they depart from that?
Bill:  Well, for one thing, the Hardluck Hannigan books take place during World War Two.  But Nazis aren’t the only enemies that Hannigan faces.  He’s also fought a demon and a Russian scientist who wanted to wipe out life on the surface of the Earth and maintain a utopian society in an undersea city.  Future plans also have him going up against criminal masterminds and war profiteers as well.  As far as a departure, the characters are much more three dimensional and you begin to almost think of them as real people.
AP: One of your series stars, Mike “Hardluck” Hannigan, takes place against an authentic historical backdrop—he finds himself contending against Nazis. And there is more than one layer of history and/or folklore here. In “Emerald Death,” for example, you have the story itself set in the Nazi era, and you also have the backstory of the Emerald of Eternity, and, in other stories, the Spear of Goliath and other exotic relics. Are you a history buff? How much do you draw on genuine historical personages and events?
Bill:  I do enjoy history, and I find the World War Two era and the old west to be my favorite areas.  In River of the Sun, Hardluck Hannigan and his friends went in search of legendary explorer Colonel Percy Fawcett, and Englishman who vanished in the Matto Grasso region of the while looking for a lost outpost of Atlantis called “Z”.  It’s nice to sometimes use the search for a lost historical artifact either real or fictional to use as a catalyst to set the quest for that particular book in motion.  Though sometimes, it’s fun to use a mystery to set them on the road to adventure. 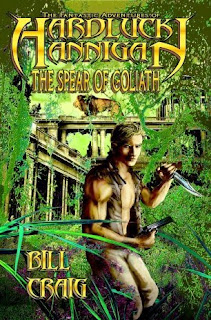 AP: I understand that you based Mike Hannigan on your father. Tell us a bit about that.
Bill:  My Dad is a very important figure in my life.  He grew up in the great depression and read Pulp tales himself.  He also is a Korean War vet and has a good knowledge of the era I am writing about.  Like Hannigan, my Dad grew up on a farm in .  But unlike Dad, Hannigan left in search of adventure, while my Dad left in service to his country.
AP: You’ve done several novels featuring Jack Riley and Moria Clark. Tell us a bit about that, and how you think those stories compare and contrast with the Hannigan novels. You’re coming from a somewhat different area there.
Bill:  The Jack Riley books are more in tone of what I refer to as High Adventure.  Like the Hannigan books, they are generally globe-spanning stories against large than life villains.  One such being my Oriental Mastermind, who both Riley and Hannigan have fought.  He also appears in the Eye of Ka, my story for Airship 2’s upcoming anthology, Tales of the Hanging Monkey which is also a creation of mine.  Difference wise, Riley is an ex CIA agent turned Chicago Cop, and Moria Clark is his investigative reporter girlfriend.  Usually one of their jobs is the catalyst for whatever adventure they go on.  In book four, it was a honeymoon cruise that landed them in the Bermuda triangle and a confrontation with .  They faced him again in The Mummy’s Tomb, which actually introduced an 80 some year old Hardluck Hannigan who was one of Riley’s heroes growing up.
Both series have elements of the fantastic, where the Hannigan books are set against a historical backdrop, the Riley books have each been drawn from headlines in the news at the time they were being written.  Big Oil was a villain in two of the books, the Russian Mob in another, Chi Pei in one, another was the return of an old villain that was bankrolling genetic research to breed perfect killers, and then up against Chi Pei again in the final book.
AP: Have you ever come up with a story idea or concept that you found intimidating? Is there anything you’d like to tackle that you haven’t attempted yet?
Bill:  The Child Stealers was a very intimidating book because it dealt with Child Abductions through Social Services and then the children were sold either into slavery or for genetic testing.  Another dark book was a one shot thriller The Butterfly Tattoo about a serial killer in a small town.  I’d like to write a full length western novel.
AP: You recently did a Hardluck Hannigan video trailer. What inspired you to do that, and how did you go about it? 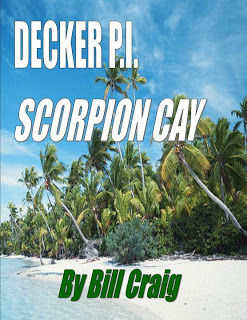 Bill:  Actually Don Gates had done a trailer for Challenger Storm, his upcoming title for Airship 27 and I liked it.  Plus, I thought it might be a  good way to build up a buzz for The Golden Scorpion which I am hoping to have out in early May.  I simply used Windows Movie maker and shots of all the covers plus some additional artwork that Laura Givens created for me, and then added American Patrol as the music to provide some period authenticity and give the trailer a lively soundtrack.
AP: What’s coming from Bill Craig? You seem to have quite a number of irons in the fire. Any projects you want to discuss? Publications? New characters or series?
Bill: I am working on the next Hannigan of course, as well as the next two Decker P.I. books, Smugglers’ Blues and A cold and Lonely Death.  I am also in the middle of a project titled Harmony Hills: Savage Autumn about small town secrets.  I’m in line to do stories for some other Airship 27 projects and contemplating a new modern day action series following a character named Jake Donovan.  And of Course Hardluck Hannigan 8: Peril in the North.
Share