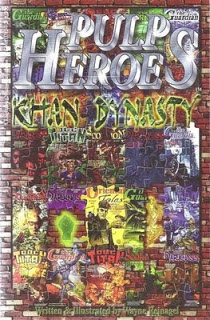 This 592-page tome features multiple storylines but the key ones take place in the 1800s and 1938. We get to see some of the Victorian Age heroes uniting against a Fu Manchu-style villain while the mysteries of that age reach their climax in the 20th century, with the pulp heroes of the day resolving the matter. Where possible, Reinagel uses actual characters that are in the public domain (Mr. Hyde, Allan Quatermain, etc.) but most of the characters are thinly disguised pastiches of famous heroes and villains (there’s a Fu Manchu-style villain, Doc Titan instead of Doc Savage, The Scorpion instead of The Spider, The Darkness instead of The Shadow, etc.)

The writing is clear and exciting, with some wonderful dialogue. In some cases, I actually prefer the pastiche version of the character to the real one — I’ve never warmed to The Spider, for instance, but The Scorpion here genuinely interested me. There are some action sequences here that are so good I really, really wish I had written them… pulpy excitement and enthusiasm shows through on every page and I can honestly say that this is one of the best pulp novels I’ve ever read. I’ve heard it called “The Gone With the Wind of pulps” and that’s fairly accurate, both in terms of length and the sheer audacity of the storyline, which take the Wold Newton Universe and pushes it through the wringer.

I found the jumping back and forth in the story-lines to be quite interesting though the extended sequence in Antarctica near the end was the only one where I thought it could have been excised to make for a tighter book.

The interior artwork consists of faux magazine covers and is by Reinagel. I really liked some of these though there was the occasional placement issue where I wasn’t sure why that cover was inserted where it was. But overall, it added to the experience immensely and helped reinforce the notion that it was Doc Titan who did all those cool things, not Savage.

But it’s not perfect. There are times when Reinagel tries so hard to insert references to seemingly every writer, character or movie that he’s ever liked into the story that it just made me roll my eyes. I’d have preferred that he’d left out the writers like Stoker, PJF and Verne. Their presence, to me, undermined the feeling that this was a real universe and got a little too self-referential to me.

And there are definite places where I wonder if Reinagel didn’t step out of the realm of homage and instead dipped into copyright violation. The stuff that comes from The Mummy movies with Brendan Frasier, for instance. No names or anything was changed — he simply recounts the plot of the film. Same for Stephen Strange, who doesn’t just pop up for a few pages but is a minor but important character. And Bruce Wayne is here, with his classic origin… I think that those characters and events would have benefited from the pastiche treatment. By using the real names and so forth, it almost felt like fanfiction and this book is too good for that.

This is a remarkable achievement and I think that anyone who calls themselves a fan of the hero pulps should put this on their reading list ASAP. Even with its flaws, it is an amazing and inspirational work that will drive you back to the stories that inspired this one. It’s that good.