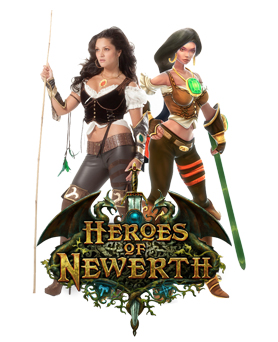 Independent game maker S2 Games is joining up with  actress and producer Paula Garcés to add a brand new main character, Aluna, to the session-based, multiplayer, action-RPG Heroes of Newerth (HoN). Seen in Clockstoppers, the Harold and Kumar film franchise, and Warehouse 13, Garcés adds her attractiveness and ability to HoN as the personality and voicepowering the  Legion hero Aluna, the character made for Aluna Comics. To watch Aluna come alive fans can visit the Nvidia booth at the Game Developers Conference in San Francisco where Garcés is going to be appearing to sign autographs on March 2nd and 3rd.

Aluna blurs the lines of the entertainment and gaming fields by delivering the look of a Maxim Hot 100 model with the powers of a Latina superhero to life in Newerth. “I wanted to bring the Aluna character to new mediums and HoN is a perfect fit,” said Garcés. “The HoNfans will appreciate Aluna’s unique story and welcome her as a hero inthe game.” Stunning and spirited, Aluna bears within her the essence of Earth itself – the old Earth  long since lost to the decay of ages. Carrying the power of the moon within a magical gem, Aluna attacks  her daemonic enemies with lethal swiftness. Because of her expertise in battle, she’s expected to be a star among the heroes of Newerth, resembling the life of the celebrity behind the hero.

Paula Garcés is known for her part as “Officer Tina Halon” on the FX series The Shield, where the role earned Paula a 2008 Alma Award nomination for Best Supporting Actress. Her tv credits include repeat roles on Law and Order: SVU, CSI Miami, and SyFy’s hit show Warehouse 13. Paula most recently finished her notorious role as “Maria” for the third installment of the Harold and Kumar film franchise, expected to launch Christmas Day 2011. Paula also just announced the season two premiere date for The Look, a style magazine  show she co-created and executive produced. It airs Saturday, March 5th, 2011 at 3 p.m. on mun2 network.