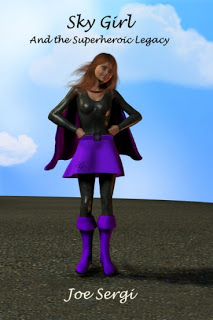 Many writers, myself included, have pondered, thought on, and even struggled with the concept of having a comic book idea and trying to translate it into prose or the reverse.   It seems to be a thorn in many of our paws that either forces us to give up or we fight our way through and the end product isn’t what we expected.   It would be great to find a prose work that captures the colors, imagery, and description of a comic book, striking that perfect balance.

Thanks to Joe Sergi, I think I found it.

SKY GIRL AND THE SUPERHEROIC LEGACY, the first of a planned trilogy, focuses on DeDe Christopher, a young fifteen year old aspiring gymnast who lives with her widowed mother, goes to high school, has a best friend, Jason, who is the ultimate geek and proud of it.  While preparing for National competition, which is being hosted at her high school, DeDe discovers she has super powers.  It turns out these super powers are the exact powers of Sky Boy, a popular supposedly fictional character.  As the story unfolds, DeDe and Jason deal with her issues of not wanting to do anything but be a teenager along with supervillains, intelligent apes, robotic menaces, and a strange conglomerate of aliens!

Now, that description is a thumbnail and covers it pretty well.  What it didn’t cover is CHAPTER 0.  Being a comic inspired novel, it has to start with 0 of course.  Chapter 0 introduces us to Professor Z, Donna Dominion, and other supervillains all teamed up to stop Sky Boy.  Yes, Sky Boy.  The opening chapter assumes that the characters thought fictional by DeDe and her entire world are real and that chapter sets a tone for the whole book.  This is, in prose, a silver age like experience like no other.  Homages, pastiches, and nods aplenty to all sorts of comic, pulp, and other popular culture concepts abound.   If you’re a fanboy/girl and want to get your geek on, just finding the easter eggs that you’ll recognize in this book will keep you busy!

What is most endearing, though, about Sergi’s work is, even though some have super powers, some wear capes, and monkeys and aliens abound, these characters are very real.  DeDe is not a superficial image of a girl, she is real flesh and blood with insecurities, strengths, weaknesses, and frustrations.  This goes for all the characters, even those who go through ‘changes’ as the book continues.  They are not mere two dimensional contrivances to tell a super hero story.  They are real people affected by all the good comic book weirdness going on around them.

The language does get a bit laborious at points, sounding a bit too comic booky, even though that is what this is, a comic book world in prose.  That is a minor drawback to what in all ways is a fantastic, fun, exciting read and although aimed at younger readers, SKY GIRL AND THE SUPERHEROIC LEGACY can really be enjoyed by all ages and all level of geek.