Ali-Designer/Formatter, Writer, Artist
AP: Ali, ALL PULP really appreciates you taking a few minutes downtime to answer a few questions. First, can you introduce yourself, some personal background and such? 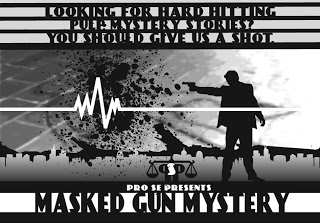 AP: You are a renaissance man as well. Designer/formatter, writer…and artist. What pieces have you done for Pro Se’s magazines and has your art work appeared elsewhere?
Ali: I’m also a pretty decent tenor, no one ever brings up the singing, sigh…
What pieces have I done for Pro Se’s magazines? You mean besides the magazines? This is a tough room!
I’ve done the bulk of the house ads that are currently in the books. I pinch hit on a couple of art pieces Let’s see in Fantasy and Fear (FnF) #1 I was lucky enough to get Ron Fortier’s “Beast of the Mountains”. It was a rush sketch, all pencil, that I had to complete in 20 minutes because we were on the absolute last day in our first month and were short one sketch. It never got inked but I played with it in Photoshop so it was close to the more finished art work we had for the other stories. In Masked Gun Mystery (MGM) #1, I got a piece of Tommy Hancock’s “Murphy’s Wake”, which was fun because it was from an earlier idea Tommy had about a book where everything was presented as newspaper clippings and diary entries and such, so the story was laid out the reflect that using fonts that changed with the material being viewed. I think I did a photo of the burning house in a newspaper clipping and an idealized appearance of the hero that was supposed to invoke the imagery of a great series of comic book stories in the 1970s featuring a ghostly hero called the Spectre. Finally over in Peculiar Advenutres (PA) #2 I contributed a piece to a story by Sean Ellis, “The Sorceror’s Ghost” which featured a scene from the story where I tried to capture this awesomely huge zeppelin in the skies over London. That was another fast sketch where inking, filters and lighting effects were done in Photoshop to cover up just how rough a piece it was.
I’m hoping to do some actual art that isn’t required five minutes after I get a story on press day, y’know just for kicks…
AP: With the myriad of talents you have, does pulp appeal to you because it can utilize all of them or is there something more that draws you to throw yourself into this sort of work?
Ali: I’m an artist and designer, so I’m always up for a project where I can exhibit and refine my skills. Pro Se covers that need in me because it’s an evolving work even with everything in place, I look at a piece and say to myself something can always be tightened or improved. The writer in me has sort of awakened cranky and hungry so I’m the process of completing a story for the first time in years which is really exciting because it’s another way to be artistic. Pro Se is open to the ideas I have, so occasionally it’s good to do favors, it opens up doors you didn’t even realize were in the building of your life. I’m even getting back to sketching so Pro Se has sort of drawn me back to skills I’ve left dormant for too long. Creatively, it’s a great place to be.
But really the appeal, the draw, the kick is to take up the challenge and see if you’re going to pull it off. It’s a rush that can’t be beat by anything when I’m in the zone and everything is falling into place. Nothing is greater than just living in that moment where you’re unstoppable and know you’ve nailed it.
AP: What about the future? What do you have in the works that might appeal to the ALL PULP audience?

Ali: Well I am constantly badgering Tommy to get some of my favorites in his bag of tricks (GIVE ME MY JOHNNY CRIMSON!) on the page…
…Oh, you mean from me specifically?
I’ve pitched a concept for Masked Gun Mystery using the magazine’s title for the story which will hopefully spawn a series of stories under that umbrella. I won’t spoil it at all other than to say it allows me to play in my favorite sandbox writing wise: crime, noir, espionage and detective fiction.  I’m hoping to get the first installment into MGM’s next issue in February.
That’s the only definite thing on the horizon, though Tommy and I are constantly talking about projects. It would be nice to pull off an adventure tale or two over in PA and I have a couple of guys from some old ideas that might fit well there. So after I get my first installment in the can I’m open to more writing on top of the design work I do for Pro Se at least.
AP: Ali, without those people like you, writers and artists today would be suffering. Thanks so much for what you do for pulp fiction!
Ali: Thanks for having me!
Share