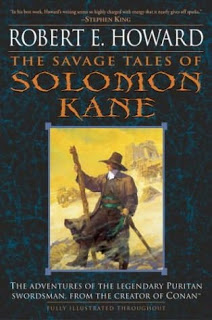 Phil also included extraordinary characters who pre-date the meteor strike under the umbrella of the Wold Newton Family, adding them as antecedents of the coach passengers. One such is Robert E. Howard’s Solomon Kane. Another character who Phil included in the extended Family, but is not directly descended from the coach passengers, is H. Rider Haggard’s famous hunter, Allan Quatermain.

First and foremost, one must ensure that the addition to the Family is directly descended from at least one carriage passenger Phil identified as being present at the meteor strike. For me, more often than not, this means making a graphic family tree to ensure I’m not missing anything.

Also pay attention to the timelines of the characters, ensuring that it makes chronological sense to hook them together as parents and children. One should look for genetic traits in common, such as many of the Family members’ trademark gray eyes, and yet not fall into the  trap of only including characters with gray eyes, or hanging the entire genealogical connection on gray eyes.

For instance, Chuck Loridans identified one of The Avenger’s aides, Nellie Gray, as a daughter of Tarzan (“The Daughters of Greystoke,” Myths for the Modern Age: Philip José Farmer’s Wold Newton Universe, MonkeyBrain Books, 2005). He was careful to make his identification on a variety of factors: Nellie’s gray eyes; her physical prowess, such as the ability to swing through the jungle from tree to tree; and Phil’s theory that characters’ biographers use code names as subtle clues to character’s real identities. In this case, the last name Gray was a clue connecting Nellie to the Greystokes. While Loridans was careful, a critique of his theory was not, attempting to debunk it because Nellie was described as having blue eyes. In Nellie’s first appearances in the Avenger pulps, she was described as having gray eyes. Only later did they change to blue. Loridans did his homework in expanding the Wold Newton Family. 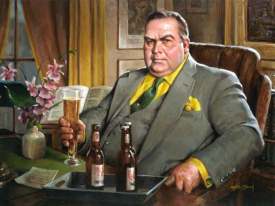 Another guideline in adding members to the Family is avoiding oversimplification. For instance, William S. Baring-Gould theorized that Nero Wolfe was the son of Sherlock Holmes (Sherlock Holmes of Baker Street and Nero Wolfe of West 35th Street). This theory has been criticized on the basis that Wolfe must, instead, be the son of Sherlock Holmes’ brother, Mycroft, since both Nero Wolfe and Mycroft Holmes are fat. In this oversimplification, fat characters can only be the children of other fat characters. The logical conclusion is that Sherlock and Mycroft Holmes cannot be brothers. But they are—that relationship comes from the original stories by Sir Arthur Conan Doyle. The lesson here is that different phenotypes—tall and lanky,
stocky and fat, etc.—are certainly possible, and should not be the sole basis for disqualifying a candidate from membership in the Family or in a particular line.

Perhaps the grossest oversimplification when adding Family members is placing all characters with the same last name in the same branch of the Family, without regard to any other qualifying characteristics. One can imagine this trap is magnified a thousand-fold with very common last names, such as Smith. I faced this dilemma when expanding on the relatives of Sir Denis Nayland Smith (the hero of Sax Rohmer’s Fu Manchu series), who Phil originally identified as a nephew of Sherlock Holmes.

In “Who’s Going to Take Over the World When I’m Gone?” (Myths), I addressed the conundrum by adding other Smiths from the works by Conan Doyle, thus expanding the thematic connection Phil began. I also chose Smith characters who were detectives or secret agents (like Nayland Smith), or had connections to Egyptology and archaeology, common themes in the Fu Manchu books. Some of Nayland Smith’s more prominent relatives include Dashiell Hammett’s hardboiled detective, the Continental Op; Algernon Heathcote “Smitty” Smith from the Avenger pulps; and Professor Horatio Smith, from the 1941 Leslie Howard film Pimpernel Smith. In my expansion of the Family tree, and as implied by the film’s title, Horatio
Smith is also descended from Sir Percy Blakeney, The Scarlet Pimpernel, whom Phil identified as one of the carriage passengers at the Wold Newton meteor strike.

With some of this background in mind, what follows is an overview of other character additions to the Wold Newton Family, focusing on descendents of those irradiated at the meteor strike, without going into exacting detail on the precise line of descent.

Dennis E. Power can claim the first genealogical post-Farmerian speculation on the internet. He added the famous detective Charlie Chan to the Family as the son of Fu Manchu, who was, according to Phil, the son of the prolific Sir William Clayton. William Clayton was the son of one of those irradiated at Wold Newton. Chan fits in well in the Family by balancing out the yellow peril stereotype perpetuated by his father. The essay incorporating Chan was revised for publication in Myths for the Modern Age as “Asian Detectives in the Wold Newton Family.” 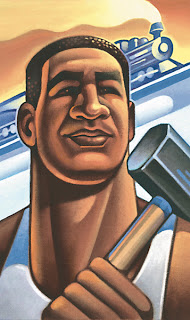 Power also added John Henry as the son of Sir William Clayton and Bafia, a female Waziri slave who accompanied Clayton on his African expedition. Here, Power blended the Wold Newton Family with American folklore and provided a basis for incorporating African-American characters such as Jim from Tom Sawyer. This addition also linked the Caucasian descendents of Long John Silver, as described in Phil’s Greatheart Silver, with those descended from Long John Silver’s wife, whom Robert Louis Stevenson described as an old woman of African descent. Power’s article on this branch of the Family, “The Wold Wold West: Hammer of Freedom—The Henrys,” is at his website, The Wold Newton Universe: A Secret History http://www.pjfarmer.com/secret/secret.htm.

In addition, Power added Rudyard Kipling’s Mowgli as a half-brother to Tarzan, in an essay adroitly reconciling Phil’s novels The Adventure of the Peerless Peer and The Adventure of the Three Madmen (“Jungle Brothers, or, Secrets of the Jungle Lords,” Myths). He also proposed, on his website, that Leslie Charteris’ modern Robin Hood, The Saint (Simon Templar), is the son of E.W. Hornung’s gentleman thief, A.J. Raffles, and thus is part of the Wold Newton Family.

Rick Lai added John Buchan’s Andrew Lumley (The Power-House) and Dominick Medina (The Three Hostages) as members of Professor Moriarty’s family. Lai was also first to propose an additional person at the Wold Newton meteor event, a young medical student named Sebastian Noel. Noel went on to father Dr. James Noel, a master criminal seen in “The Suicide Club” from R.L. Stevenson’s New Arabian Nights. Lai also related Dr. Noel to the Moriartys. All of these additions to the Family are in Lai’s essay “The Secret History of Captain Nemo” (Myths).

In addition to Nellie Gray, Chuck Loridans’ identified another daughter of Tarzan. Nellie’s mother was the love of Tarzan’s life, Jane Porter, but during one of Tarzan’s infamous amnesiac blackouts, he succumbed to the wiles of La of Opar. Their daughter was orphaned, and eventually became the criminal-turned-secret agent Modesty Blaise (“The Daughters of Greystoke,” Myths). 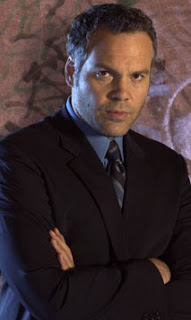 Brad Mengel’s favorite contribution to the Wold Newton Family is Detective Robert Goren from the television series Law and Order: Criminal Intent. Mengel proposes that Goren is the great-grandson of Sherlock Holmes (“Watching the Detectives, or, The Sherlock Holmes Family Tree,” Myths). Mengel has also proposed that Robert B. Parker’s Boston P.I., Spenser, is the nephew of Raymond Chandler’s Philip Marlowe (“The Land Family,” The Wold Newton Chronicles website http://www.pjfarmer.com/chronicles/index.htm).

One of Wold Newton researcher Matthew Baugh’s favorite characters is Myra Reldon, an agent of The Shadow who often poses as a Chinese woman named Ming Dwan. I included her as a granddaughter of Fu Manchu in “Who’s Going to Take Over the World When I’m Gone?” (Myths). In the same essay I postulated that two of James Bond’s adversaries, Dr. No and Ernst Stavro Blofeld, were Wold Newton Family members. Dr. No was the grandson of the aforementioned Dr. James Noel. Dr. No’s maternal grandfather was Fo-Hi, from Sax Rohmer’s The Golden Scorpion. Blofeld was the great-great grandson of Sir William Clayton.

Cheryl Huttner built upon a small clue in Phil’s family tree to add occult detective Jules de Grandin, and while she was at it also managed to include Agatha Christie’s famous Belgian sleuth Hercule Poirot (“Name of a Thousand Blue Demons,” Myths).

Mark Brown, in a short piece in Myths, added a notable female detective to the Family, Sue Grafton’s Kinsey Millhone, as a daughter of Ross MacDonald’s Lew Archer (“D is for Daughter, F is for Father,” Myths). Additionally, Brown’s “A Look at the Wimsey Family” (The Wold Newton Universe website 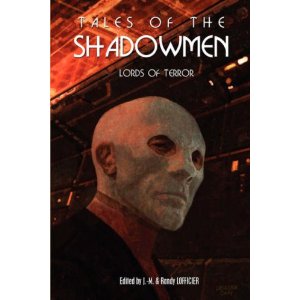 Expansions of the Wold Newton Family are not restricted to non-fiction articles. Chris Roberson’s story “Penumbra” (Tales of the Shadowmen, Volume 1: The Modern Babylon, Black Coat Press, 2005), expertly hinted that The Batman might be The Shadow’s son. Another story in Tales of the Shadowmen, Volume 1, my own “The Vanishing Devil,” added martial arts expert Shang Chi as a grandson of Doc Ardan (Doc Savage), albeit in an unusual way. The original Marvel Comics Shang Chi stories had already established him as Fu Manchu’s son. Jean-Marc Lofficier, noted French SF and comics writer, and editor of the Tales of the
Shadowmen series, also maintains the French Wold Newton Universe website http://www.coolfrenchcomics.com/wnu1.htm,  which adds innumerable French characters to the Wold Newton Family tree. It expands the family trees of gentleman thief Arsène Lupin and detective M. Lecoq (both of whom Phil included in the Family, at least by implication), and adds other popular French characters such as the arch-villain Fantômas and the detective Jules Maigret.
Without a doubt, the greatest challenge facing Wold Newton researchers is determining Philip José Farmer’s exact place in the Wold Newton Family. In fact, Phil, in his Myths back cover quote, extended this proposal: “I’m just waiting for them to prove that I am also part of the extended family.”

I believe we will be taking him up on his friendly invitation soon.