Sarge Portera does it again with another eclectic column!! INSIDE SUPREME!!!

INSIDE SUPREME by Sarge Portera
Justice, Inc vs. U.N.C.L.E. 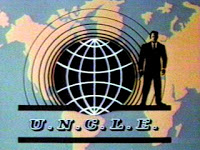 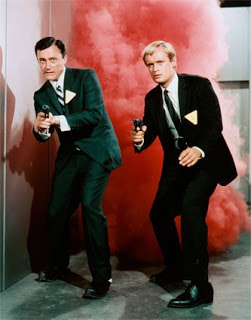 At one end of the block that this secret headquarters occupies is a public parking garage. At the other end is an elegant whitestone with two rather interesting occupants. On one floor of the whitestone are the U.N.C.L.E. offices opened to the public. This suite of offices is staffed by young men and women in business dress. These functionaries efficiently maintain the corporate appearance of the day-to-day functions of a nondescript governmental agency. In all appearances this face of U.N.C.L.E. looks like a harmless fact gathering agency or a do-gooders’ organization of a world-spanning nature.
The remainder of the whitestone is occupied by an exclusive key club known as “The Mask Club.” The club’s wealthy members hide their faces behind masks while the charming hostesses and cocktail waitresses wear hardly anything but Mardi gras masks. It’s through this men’s club that the sedate Mr. Waverly entered and left U.N.C.L.E. headquarters. He most likely had a room of his own at the club.
How am I doing thus far?
If the baby boomers are still with me, you’ll recall that it was a few years later that Warren Paperback Library issued “The Avenger” paperback reprints by Paul Ernst. 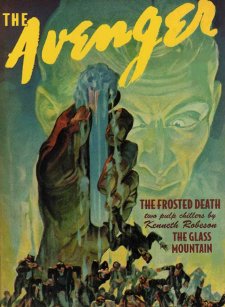 Most of us who’ve read an Avenger actioneer by this particular pulp author recall the formulaic description of Justice, Inc. that prefaced each mystery. Some of us Avenger fans can even recite from memory a fair description of
Bleek Street

down to the nonstandard Venetian blinds.

That’s why I’d like to share an alternative description to Justice, Inc. that compliments Paul Ernst’s. It’s by Emile Tepperman when he wrote “Calling Justice, Inc.” for “Clue Detective Magazine.” I guess what I like most about this summary is its economy of words where it not only describes Justice, Inc. but encapsulates the Avenger’s credo, too! Here’s how the opening of the fourth chapter of this short story plays out.
“On Bleek Street in the city of there is a modest building upon the front of which appears a small plaque bearing the cryptic inscription: Justice, Inc. Bleek Street is no thoroughfare. It is a dead-end street and there are no pedestrians that pass by chance, only those that are bound for the building of Justice, Inc. And those are people in deadly need of help. For this is the headquarters of Dick Benson – The Avenger. Having himself passed through a baptism of fire, his life and his huge fortune have been devoted to saving others from the ordeal to which he was subjected. No person who seeks his protection from the overlords of crime – in whatever part of the world it may be – is denied assistance. The organization
which The Avenger has built-up is small, but compact and deadly efficient. Operating like the well-greased fighting machine that it is, it clicks on all eight once it rolls into action..”
Nuff said!
Each time I go back to a “Man from U.N.C.L.E.” paperback I can’t help but compare them to the descriptions Paul Ernst or Emile Tepperman used when setting the Avenger’s cases against the  Bleek Street location of Justice, Inc. In fact, I think I’ll settle down in one of our comfortable high back chairs with a copy of “The Copenhagen Affair” by John Oram, right now. You’re welcomed to join me! Care for a cold glass of lemonade or loganberry? Afterwards we can conspirationally converse about locating copies of “The Rainbow Affair” by David McDaniel and “The Coin of El Diablo Affair” by Walter Gibson.
ALL PULP Post Script

In Chapter 5 PULP HEROES: MORE THAN MORTAL, it’s imaginative author, Wayne Reinagel, takes us behind the scenes in “Simon Blake – The Guardian” with the byline reading, “April 5, 1945 7:30pm” It’s in this chapter that Reinagel sheds some light on the secrets behind The Guardian’s Unsolved Mysteries, Inc. and Praetorian Securities!

“Unsolved Mysteries, Inc.” is inscribed on a small but simple plaque by the only door that gains public access to the Guardian’s headquarters on  Barren Street. The reception area is simply furnished and sports the same bulletproof windows that adorn all the buildings on the block. All these other buildings are false fronts that conceal reinforced concrete walls. This makes the entire city block that Simon Blake owns a veritable fortress! Around the corner on Seminary and 8th Street are Mick McGrath’s pharmacy and pharmacological lab next door to Wall Walker’s electronic workshop. Neither of these labs can be reached by their trick entrances. Instead, Blake’s Barren St. headquarters is a maze of concealed armories, elevators, garages, hidden hallways, living quarters, book lined meeting rooms, offices and secret stairwells.
On the waterfront, a few blocks from Doc Titan’s Global Navigator Consortium is a large warehouse with a sign that reads “Praetorian Securities.” Praetorian warehouses Blake’s fleet of autogyros, speedboats, armored towncars, swift roadsters and trucks with the most advanced detection and listening devices available for the pulp era.
Unsolved Mysteries, Inc. and Praetorian Securities day-to-day operations & staff are managed capably by Gabe and Bell Robinson.