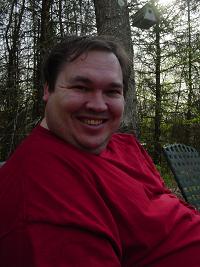 AP: Lee, welcome to ALL PULP! First, can you tell us about yourself, some personal background?

LEE: I’m a high school graduate with a smattering of junior college, and words have been a part of my life as far back as I can remember. My parents read to me when I was young, and I’m always haunting the public library and bookstores, so it’s a rare day if I don’t have a book in my hands at some point. Ever since I figured out what a writer was and did, I have always tried to pursue that career path somehow and now the dream is finally coming true.

LEE: My personal tastes have been all over the genre spectrum, although I do find myself always coming back to science fiction, fantasy, and detective mysteries. I also enjoy good television, anime/manga, music, and am a major comic book fan. While I could list several influences in each category, when writing, I do tend to stay within the sci-fi, fantasy, and mystery genres regardless of what format I’m working in, because they have the most adventure and biggest sense of good triumphing over evil.

LEE: I’m not a fan of true horror, and prefer more ‘milder’ work like Kolchak, the Night Stalker or a good Godzilla movie to the Jasons and Freddies of the world. I personally feel you don’t need to know about every single drop of blood and inch of entrails to build suspense and drama. My biggest intimidation period is self-promoting. As a firm believer that one’s work should speak for itself, I am constantly being told I’m too modest for my own good. Otherwise, I find period pieces the most daunting to create, because while I have no problem doing the research, I’m always afraid of getting some little minute detail wrong that might spoil the story for the audience.

AP: Are you a pulp fan? If so, how has that affected you as a writer of pulps? If you aren’t a longtime fan, then why pulp? 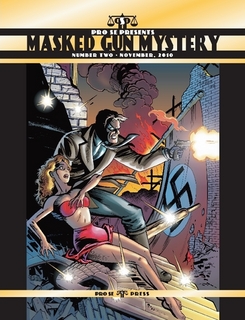 LEE: I may not be as big a fan as some of the other people I work and associate with, but am a fan of the classics such as The Shadow and the works of Edgar Rice Burroughs. I’ve been told my stories can be a little terse at times, which is akin to the limited word count some pulp authors had to work with, but were still able to tell a great story despite any restrictions. As for why pulp, why not? The pulp style can trace its roots back to at least Cervantes’ Don Quixote, if not earlier, and the genre is just as entertaining today. Its influences are quite apparent in material as diverse as The Wild, Wild West; Jonny Quest, the Indiana Jones and NCIS franchises, Castle, and some of today’s comic books.

LEE: First, I must thank Ken Janssens for the job referral, or I would never be where I am today. As a fan of various media, I’ve seen what does and doesn’t work over the years and as a writer, use that knowledge as a starting point, while trying to put fresh new spins on the presentation and hopefully not repeat what’s been done before. So when writing, I try to make sure people have as much fun reading my material as I do creating it.

AP: You’re a staff writer at Pro Se Productions and have a couple of recurring characters. Tell us about HUGH MONN, PRIVATE DETECTIVE.

LEE: Someday, mankind finally reaches the stars and takes its place within an already populous universe. But problems still exist and at times you need someone like Hugh to resolve them. I took some of the classic private detective trappings, like having a war veteran with his own sense of justice trying to earn an honest living the best way he knows how, and placed everything within a futuristic setting on another planet far removed from our own solar system, which hasn’t really been done that much within the mystery/detective genre. Of course the biggest mystery might just be Hugh himself. He freely admits in the first story, “Dineena’s Dilemma”, that ‘Hugh Monn’ (a play on the term Human) is just a business name, but there is something within his past he is not proud of that has helped shape him into the man he is today. I do reveal his given first name within the sixth adventure (“At What Price Gloria?”), but can assure the readers that the answers will be eventually revealed as the series progresses within Masked Gun Mystery without it affecting their enjoyment of the individual stories.

AP: Now, onto your other ongoing series at Pro Se. It’s a departure from futuristic mystery. Just what is WYLDE WORLD all about?

LEE: Very briefly, an ordinary man wakes up with absolutely no memory of his past life before finding himself in an exotic jungle setting. But as he soon discovers, it is not a dream, for the village chief wants to execute him for interfering with the latest ‘blessed sacrifice’. Now with the only person willing to befriend him in this alien landscape, he strives to stay alive while trying to figure out who he is and where his people are, and that’s just the opening chapter! After Hugh was accepted, I was asked if I had anything else to offer Pro Se, so I reworked the opening chapters to the novel I was working on at the time. Although a few people have compared it to James Cameron’s Avatar, WYLDE WORLD is as much a homage to my enjoyment of the works of Edgar Rice Burroughs as it is my own creative endeavor. The first real (all text, no pictures) book I could ever read totally on my own was Burroughs’ A Princess of Mars. I read it and the rest of the Mars books throughout the fifth grade, thanks to the school library. I’m presenting the tale in the style of the classic Saturday afternoon movie serials, and do bring the reader up to date on the previous installments from past issues of Peculiar Adventures as each new story appears. It started with issue two, and while the first story arc should conclude somewhere around issue eight, the series will continue beyond that!

AP: You’re also an editor for Pro Se. What do you edit and what do you think you bring to the position that can be of benefit to the writers you edit? 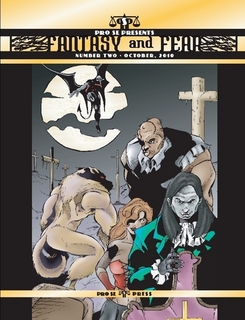 LEE: I have been granted the privilege of editing Pro Se’s Fantasy and Fear magazine, starting with issue two. I like to think I bring all my experiences past and present from both the fan and the professional’s perspective to the position in hopes of presenting everything the writers contribute in the best possible light. While I realize that publishing is a business, I try to maintain a friendly atmosphere and ‘open door’ policy with everyone. I even thanked by e-mail all the contributors to issue two I had contact information on for their hard work, a practice I will maintain on all future issues.

AP: What’s coming from Lee Houston, Junior in the future? Any projects you want to discuss?

LEE: In what I laughingly call my ‘spare’ time, I am working on other ideas; including my own super-hero and an all ages’ adventure featuring a group of inner city kids. Meanwhile, I do want to assure readers that HUGH MONN and WYLDE WORLD will continue indefinitely. Eventually there will probably be trade paperbacks collecting their stories thus far, although I am looking forward to reworking Wylde back into the novel it was originally intended to be for that volume. A Hugh adventure will appear within the 2011 Pulp Ark Convention Benefit Book to help raise money to acquire pulp books for libraries. I am also the Editor-In-Chief of The Free Choice E-zine at www.thefreechoice.info and recently edited the three issue comic book mini-series Raye Knight: Spellbound for its writer/creator Victoria Pagac, with art by Lou Manna, which is available from Indy Planet.

AP: Thanks a lot for taking time to visit with ALL PULP, Lee!

LEE: Thanks for inviting me.