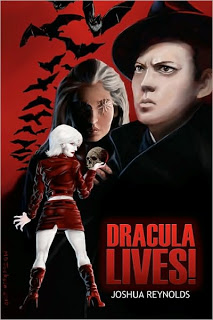 Jonas Cream is a former British spy who now works for himself, selling his deadly services the highest bidder. When an old colleague named Harry Lime offers him a lucrative job of collecting a wooden box from a Rumanian auction house, Cream, although weary, accepts the assignment. Shortly thereafter he is approached by the Psychic Branch of the British Secret Service. They want Cream to act as a double agent, carrying out his mission for Lime while actually obtaining the box for them instead. Then he is attacked by a group of foreign assassins known as the Order of the Dragon. They make it quite clear they do not want him to succeed, let alone continue breathing.

The first half of Joshua Reynolds’ fast paced thriller reads very much like any modern day spy versus spy novel with all the traditional elements of a Robert Ludlum and John LeCarre espionage mystery. Then it gradually begins to morph into a horror tale as Cream learns exactly what it is all these different factions are after. The box contains the skull of Vlad the Impaler, better known as Dracula. Now Cream finds himself caught in the middle of a deadly tug-of-war between those who want to see the skull destroyed and those who believe, through black magic, the Lord of the Vampires can be brought back to unholy life.

Reynolds keeps the action moving at hyper-speed and clearly has fun toying with his all too familiar cast of characters. It takes a great deal of panache to swipe a character from a classic movie. For the uninitiated, actor Orson Wells portrayed American spy Harry Lime in the film THE THIRD MAN. Which is why he is portrayed on the book’s cover, a really wonderful painting by M.D. Jackson. Other players in this book are also named for well known literary spies while others like Ms. Harker are taken from the original DRACULA novel by Bram Stoker.

The only weak part of this thoroughly enjoyable book is the fact that it is but the first in a series and the conclusion doesn’t end the story. In fact one could look at the entire novel as only the first chapter in the larger saga Reynolds has planned for the blood-sucking Count. Readers not fond of continued series would do well to avoid this book. As for the rest of us willing to invest our time in an original, gripping horror adventure, I say bravo Mr.Reynolds and where’s book number two?