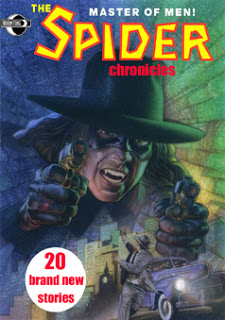 “You’ll never change,” Wentworth chided back. “Suspicious of me till the end.”

“With good reason,” Kirkpatrick smiled, the ends of his mustache curling upward. “The news that Richard Wentworth, famed criminologist, is deciding to retire, get married and finally settle down, is going to raise a lot of eyebrows in this city.”

“Well, according to you, Kirk, the Spider’s elimination of the Poison Fog Gang ends the last of New York’s great crime-rings. Seems like things will be getting pretty dull around here from now on.”

There was a long moment of silence as each man studied the other, many years of mysteries and mayhem shared between them. Each had risked his life for the other, many times. They hadn’t always agreed, but both men were dedicated soldiers in the same war. Few men were closer than these two.

“And so I take it that the Spider will also be retiring, then?” Kirkpatrick sipped his drink with a smirk.

Wentworth refilled his own glass, his expression seemingly devoid of interest.

“Well, how on earth would I know what the Spider is planning? It’s not like we share gossip during social functions, you know.”

Kirkpatrick nodded, but noted that his old friend never quite looked him in the eye whenever discussion of the notorious vigilante came up between them.

“True enough, Dick,” the Police Commissioner replied with narrowed eyes. “I’d like to think that you have very little in common with that murdering lunatic…and yet—”

“As I’ve said many times before, I think you’ve got the Spider all wrong,” his handsome face was almost boyish in its innocence. “You might not approve of his methods, but he definitely gets results that your official policemen frequently fail to achieve. Ah, what is it, Jenkins?”

The butler stood with formal dignity in the doorway, ignoring Kirkpatrick’s obvious agitation.

“Miss Van Sloan phoned, sir. The Daimler has unfortunately broken down, stranding her in the Garment District. A faulty fan belt. I suggested that Mr. Jackson meet her with another vehicle, but she insisted the subway would be faster. She begs your pardon, sir, and should be here within half an hour.”

Wentworth frowned slightly, then brightened. “Well, Nita and I have waited this long,” he sighed. “Another thirty minutes can hardly matter. Care for another drink, Kirk, ol’boy?”

The Commissioner waved him away. “As I was saying, Dick, while it is true that I have, upon occasion, openly suspected you of being the Spider, there always existed an alibi to absolve you. Rather convenient alibis, too, I might add.”

Wentworth smiled openly with a frank, honest expression. There was no denying the man’s charm. “Leave it up to you to reopen that old chestnut!” he casually clicked ice into his glass. Well—what is it, then? Am I innocent…or am I guilty?”

Kirkpatrick faintly grinned, and winked at his friend. “Let’s just say I wish you a happy retirement,” he raised the glass, then drained the last swallow.

“Your pardon, sir…” the butler nearly stammered. “It…it’s the station for Commissioner Kirkpatrick. There’s been an accident…a subway train has just wrecked in the tunnel near 94th and Broadway…there appears to be very few survivors, sir.”

Kirkpatrick got instantly to his feet. Wentworth was already at the door, flinging on his heavy overcoat. His steely eyes shone with a terrible intensity as the suspected horror cut deep into his heart.

Suddenly, the ever-waiting shadows surged back into the soul of Richard Wentworth.

*****
Imminent scientist Doctor Emerick Berg had done what was commanded of him. With deep regret he’d performed the test upon that old prying reporter in the tenement, where the range and precision of his machine had worked only too well. It had exceeded his theories, truly fantastic and terrible in its wake.

He peered down again at what remained of his hands, remembering the fine artistic extensions they had once been. Now only two digits remained, a thumb and a forefinger. He’d been generously allowed to keep these, so he could more deftly demonstrate the operation of his hellish mechanism. The other fingers had been wrenched out by the roots, a more than sufficient persuader in divulging all his confessed secrets.

Now, alone in his cell, Dr. Berg awaited the dreadful news of the subway.

It was not long in coming.

“We are triumphant, Doctor…your destiny is fulfilled.”

The being who called himself the Crucible lumbered his great amorphous mass into the chamber, the fragile dwarfish creature who was his brother followed helplessly behind him.

Berg’s own deep sense of guilt wouldn’t allow himself to look into the hate-seethed eyes of the roaring giant. The pained and tragic gaze of the brother, however, screamed volumes into his tormented conscience. Wretched as he was at that instant, the scientist still felt pity for the wizened little man in the shadow of the monster, knowing full well that he was, in many ways, just as much a prisoner of the Crucible as he himself.

The dwarf frantically clasped the other’s massive shoulder. “ Please, brother,” he pleaded with horror. “ This madness must stop…be merciful—”

The Crucible savagely struck him. “Was anyone ever merciful to us?” he scoffed. “You always were the weak one. It is ludicrous that we share the same blood.”

The giant drew a heavy revolver from his ponderous robes. Berg sighed, and stopped his shuddering. A gun.

Good. This would be quick, not like what the fiend had done to his hands with the rusty pliers.

“Your place in history is assured, Dr. Berg,” the Crucible nodded as a loud report ended what was left of the scientist’s brilliant mind, bursting it onto cracked plaster walls and rotten wooden rafters.

“He served his higher purpose,” the Crucible rumbled. “ I’m satisfied that I can successfully operate his machine alone. The subway was merely an experiment. The Crucible’s masterpiece awaits.”

Doctor Emerick Berg’s slavery had abruptly ended, but to the terrified dwarf, the bondage was as complete as ever. Worse still, he knew full well of his brother’s hideous scheme. Hot, seething Hell was coming to countless unsuspecting thousands. There seemed no chance of stopping it now.

New York was already doomed. The city just didn’t know it yet.

*********
Beneath the pavement of 94th and Broadway, chaos ran wild amid the dead and the dying. Tough, seasoned cops had gone down into the subway tunnel only to stagger out again in stupefied hor ror just as the entrance collapsed behind them. It could be hours before rescue crews might reach the dozens of casualties who remained trapped below. Although there were survivors, it all seemed quite hopeless.

Richard Wentworth clambered over the rubble and wreckage of the tunnel with the soundless stealth of an alley cat. Nita. Sweet, loving, ever-loyal Nita. Her bright intelligent eyes and warm luxuriant lips burned in his mind, and in his gut. No matter the risk, he would never abandon Nita.

It had been a simple matter to slip away from Kirkpatrick during the panic and confusion at the subway entrance above. Steadily Wentworth made his way toward the disaster, sometimes crawling, sometimes burrowing, heart pounding and throat tightening with each foot of painful progress. He didn’t know how long he had been at it. It didn’t matter.

Then, almost miraculously, Wentworth penetrated the tunnel. It took a long moment before his eyes could adjust to the sudden change of illumination. He stared, unblinking, taking it all in. The scene could almost have been a stanza out of Dante. Flinching emergency lights flashed a lightning storm the color of blood over the carnage, and thin ribbons of grey smoke snaked through the narrow claustrophobic passage carrying a thick, greasy stench throughout the underground. It was the odor of death.

The subway had jumped the track, that much was apparent, crashing into the coiling tunnel with its cars twisting and welding together from the awful impact. The two front cars still appeared to have living people inside, although there was an indescribable wrongness about them as seen at first glance through the shattered windows.

But, Wentworth had no time to dwell upon that for outside the train, there in the tunnel, terrified, once normal people, were dying and killing each other. The screams reminded him of the Great War, and being again in the trenches. The entire crowd of perhaps half a hundred survivors frantically, hopeless, sought escape no matter the cost. Makeshift clubs raised and fell, bursting flesh and crushing bone.

In a growing rage, Wentworth watched as a small child was trampled. An elderly woman was struck and flung bodily like a broken doll above the splintered tracks. The crowd leapt and swarmed, and a surrounded man, already grievous injured, was torn to pieces.

He had seen enough. If this breeding fear were to be controlled, then it must been mastered by something even more fearsome.

Wentworth’s sudden motion was deliberate and uncanny as his reversible topcoat unfurled into a full dark cloak draped about his shoulders and swinging down to his heels. He quickly molded his black hat into a slouch that pulled low over a lank dead wig concealed in its crown. A black silk mask and snarling ivory fangs came from a secret pocket, and were deftly donned to a more than sinister effect.

There was no more Richard Wentworth. Instead, a crouching, burning eyed monster stood in his place, seething with menace and revulsion. The maddened mob would recognize him instantly, and the sight of him would shock them with a fresh terror.

Big black guns slid from their hidden holsters, exploding thunder through the confines of the tunnel. The violence stopped instantly, replaced with utter silence.

Then, the Spider laughed.

“You all know who I am,” he grimaced, the sharp teeth gleaming in the fading, pulsing electric light. “I will kill the next man who strikes a blow.”

A low murmur followed, he heard his awesome name uttered by a few with hushed reverberations. The aggression was over.

The Spider indicated the makeshift tunnel with a wave of his gun-hand. “Quietly now,” he hissed, more creature than man. “You can all escape through here. Anyone who can still walk will take up the injured and carry them to safety.”

After a brief moment of stillness, the mastered mob obeyed and, puppet-like, removed the wounded and themselves through the narrow tunnel to safety.

The Spider glided with his infamous lurching gait among the tracks. The fanged mouth suddenly lost most of its menace, becoming a grim straight line.

Something had caught his eye.

He bent, snatched the thing up. It was a green high-heeled shoe.

The steely ferocity left his gaze, growing moist. Wentworth read the label visible on the inner sole, but he was already certain of its owner:

Made Expressly for Miss Nita Van Sloan
His gut had been right, as always. Nita was on the train.

END OF PART TWO
TUNE IN NEXT MONDAY FOR PART THREE OF CITY OF THE MELTING DEAD!!!
To purchase THE SPIDER: CHRONICLES anthology containing this story and more, go to http://moonstonebooks.com/shop/item.aspx?itemid=414 today!!
Share