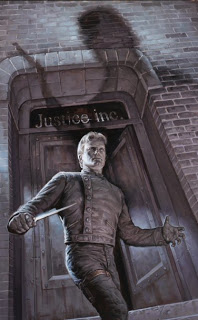 I am editing “The Avenger Chronicles” with Moonstone’s EIC Joe Gentile. Joe and I are both huge Avenger fans and I have written a history of The Avenger called The Gray Nemesis. The first volume is out and number 2 is nearly finished. All stories are in and edited and it will be called: The Justice, Inc. Files.  Along with the story I’ve written for the voume., called Vengeance, Inc., I have done a series of six vignettes, each centering on one of The Avenger’s aides, for the special hardcover editions. Number 3 is half edited and will be ready soon, as well. We have some great stories by Joe, myself, Barry Reese, Ron Fortier, Will Murray and numerous others. And a couple of special surprises.

With Sherlock Holmes, the volume will focus on “crossovers”, teaming the Great Detective with some of fiction and history’s greatest characters. My own tale features Sherlock solving a case with Calamity Jane, allowing me to draw on my Western writing background and present two very different characters interacting with one another. It was one of the most difficult stories I have ever written, and I wanted to stay true to Doyle’s character and style, plus have a decent mystery for them to solve. My good friend, writer Martin Powell, got me involved in the project in a story writing capacity originally (and Martin is THE Holmes authority with some truly wonderful tales and comics written about Sherlock). I will be editing the anthology with Moonstone’s EIC Joe Gentile.