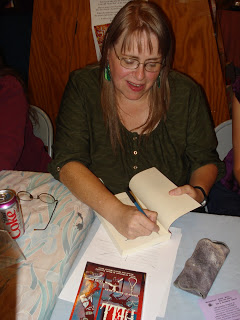 AP – First of all, thanks for joining us here at All Pulp, Laura and being so gracious as to answer these questions.  You have made quite a name for yourself as a talented cover artist working in all kinds of genres.  Before we dig into that career and your new endeavors, why not tells us a little bit about yourself, your education and background etc.  When did you first start drawing professionally?
LG – I got my degree in commercial art at a school called Ferris State College in , where I learned that the day of the illustrator was dead, and that using a computer for graphics was an idea that would never catch on.  Hey, it was the 70’s!
My first paid art gig was doing a large canvas poster of a mermaid for a carnival, while still a student.  I wanted to be a comics artist so bad I could taste it, but wound up doing ads, silk-screening and a little cartooning on the side.  The closest I came to my dream was doing a gay porno comic for a publisher.  Why didn’t the guy quit his job shoveling elephant poop?  What, and leave showbiz?
AP – As you’ve drawn everything from fantasy, horror and science fiction, is there a particular genre you like more than others?  Why is that?
LG – Easy one, science fiction, or more properly, space opera!  Give me a good space battle and people in impossibly ornate space suits populating weird planets with strange aliens and terrifying critters, and I’m in hog heaven.  Heroes, villains, fate of the universe in the balance—everything else seems pale by comparison!  Things like that grabbed my imagination as a kid and have never let go.  I love it all but SF assignments always make me smile a little wider.
AP – Which would you say is your least favorite and why? 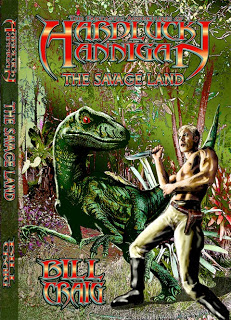 AP – Who would you say have been your biggest influences in your development as a cover artist?
LG – First and foremost would have to be Frank Frazetta, his covers would smack you up side the head and demand to know why you hadn’t already bought the book!  Norman Rockwell covers always spoke to the commonality of humankind.  You instantly know the whole story, on a Rockwell cover because, in some way, it’s your story.  James Bama did all those 60’s Doc Savage covers and they all basically had to be the same cover, but they always seemed like he had managed to re-invent the wheel, every time, and left the viewer stunned, every time.
I see bits of a hundred comic book artists, illustrators of all persuasions and fine artists, working in a zillion styles, in my work and I love the view that I get from standing on the shoulders of these giants.
AP – Many of your works have a photo realism about them.  Is there a particular way you achieve this effect and what medium to you like to work in?  Are you a traditional artist using canvas or do you do all your work digitally?
LG – I am a traditional artist who works digitally.  I use a lot of photos that I shoot myself in my work–as does every “traditional illustrator” who is working in a vaguely realistic style.  I don’t just slap photos together and make a computer collage.  The pictures are simply a starting point for where my imagination wants to go.  I work in Adobe Photoshop and it’s like having a studio with every artistic tool I could ever imagine; every type of paint, and in infinite color combinations that would take hours to mix, working on any size and shape of canvas I desire, every brush and palette knife I’ve ever wished for, and all at my fingertips.  Not only that, but it bestows god-like vision, allowing you to see the tiniest detail or manipulate the colors to try nearly infinite permutations and combinations.
A computer is just a tool box.
AP – The one writer whose books you’ve become affiliated with is Billy Craig and his hard edged private eye thriller.  How did your association come about and what is about Billy’s work that lends itself so easily to your dynamic covers?
LG – I met Billy through Pulp Factory. He’d gone on-line and checked out my portfolio and contacted me to see if I would charge him an arm and a leg to do book covers for him.  I have fees for bigger publishers and then I always am willing to adjust them to accommodate the guys with more heart than money.  Billy has a ton of heart and he kept giving me goofy challenges that I just loved.  I mean, how many times in one’s career is one asked to do a fight between a guy with a knife and a velociraptor?  Give me a fun challenge and you won’t see me the rest of the day. 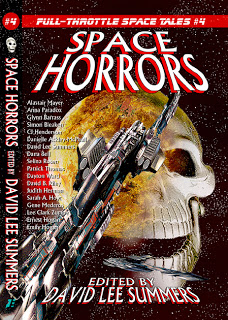 AP – You recently did several pulp covers for Airship 27 Productions.  Was this your first introduction to the world of pulps and did you enjoy the experience?

LG – I’ve loved pulp art and pulp heroes for most of my life.  I am just young enough to have missed the age of pulps but I was introduced to them in the pages of Jim Steranko’s magnificent “History of Comics”.  So, I grabbed up whatever I stumbled across and eventually fell in love with the whole genre.  I did a couple of covers that had a very pulp like feel, and they got noticed in the right circles.  I had a blast doing the Airship 27 covers though my Captain Hazzard cover looks a bit rough to me. It was a rush job and I tried some (for me) new and ambitious things.  The bagman, I think I nailed though.  Both were fun and I hope I get to do many more.
AP – SIX GUNS STRAIGHT FROM HELL is your first published fiction and editorial credit.  How did this come about in the first place?
LG – I had done many covers for “Science Fiction Trails” but when I had an idea for a story, David B Riley decided to humor me and gave it a look.  He loved it.  Later, when he decided to put out a weird western collection he asked if I might consider co-editing the thing.  I said no, then, I said I’d think it over, then somehow I was doing it.  I can be such a sucker.  Anyway, once I started seeing some of the things coming in, I decided I could probably do as well.  To my utter surprise, the two I submitted were both accepted and that’s how I became alias: Renee James as it seemed a bit tacky that I have two stories.
AP – Were you apprehensive of writing at all? 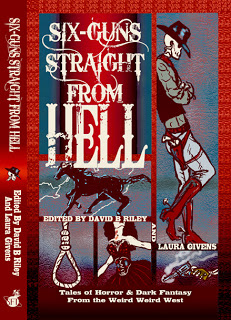 LG – No, writing is just like illustrating but with more words.  Actually, I have very little confidence in my abilities generally.  What I do have absolute confidence in is the story or the illustration, if it’s there in my head and I like it, all I have to do is get out of the way and let it happen!
AP – Now that the book is out, what did you learn from the experience and do you plan on doing more writing along with your art?
LG – I want to do more short stories and maybe find a novel that needs me to get out of its way.  The art has gotten me a number of connections and I will exploit as many as I find necessary to conquer the world… um, I mean to get my foot in the door.  I love doing art and intend to keep at it full steam (reasonable rates, satisfaction guaranteed – end of commercial).  I learned that an editor isn’t a proofreader—at that I’d be hopeless—and that the true role of an editor is to nurture talent and find the gem beneath all that dirt.

AP – Where can fans go to see your work and perspective clients commission you and what do you have in the works both in writing and art coming in the near future?

LG – My on-line portfolio may be found at http://www.lauragivens-artist.com/  Poke around on all the various pages and you’ll see lots of covers as well as black and white and color illustrations.  You’ll also find the stuff I do just because I have an idea that I need to scratch.  I can be contacted at lauragive@comcast.net  As for the future, I have a couple of stories in the hopper and some covers still out awaiting final approval and I’m always looking for the next bright shiny challenge that totally distracts my attention.
AP – Laura, thanks so very much for taking the time to chat with and continued success in all your ventures.
Share