ALL PULP is proud to debut its newest feature!!  So many interviews, reviews, columns, etc. get done here at ALL PULP and elsewhere that inform you the fan about the established writers and artists, the veteran creators who have made Pulp what it is today!  ALL PULP endeavors to also introduce you to those creators who have joined this Pulp Renaissance or Revolution or whatever you may call it recently and will be a part of the future of Pulp!
NINE FOR THE NEW is a nine question interview format that will focus on creators of Pulp who have only been published within the last 12 months or so. New voices writing new words, new hands drawing new faces for Pulp today and tomorrow!  Have someone you think should get our nine questions (Most of them are the same, with only slight variations concerning specific characters, etc.)?  Then contact ALL PULP at allpulp@yahoo.com, leave a comment, or post on our facebook page!  Now, without hesitation, let’s get on with the first NINE FOR THE NEW!!
CW Russette-Writer/Creator/Artist 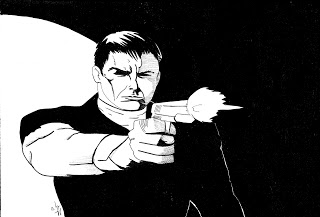 AP:  CW, welcome to ALL PULP!  First, can you tell us about yourself, some personal background?
CWR: Sure, I’m Canadian born but have lived in America since I was a teenager. I was in the military for a few years during which I took a writing correspondence course that really got me interested in writing as a profession. I’ve been writing and drawing about my characters and those of others since I was a wee lad. I used to favor drawing monsters and giant robots at a very early age. In high school I started taking my writing seriously but still thought of myself as an artist that writes where as now it’s rather the opposite.
AP:  What works have you had published in the pulp field, including any books, short stories, etc.?
CWR: I’ve had two comic books published by Modern Pulp Comics through Rorschach Entertainment (Lucifer Fawkes: Blood Flow and The Blind Ones) as well as a number of short stories through Pro Se Productions’ Peculiar Adventures and the upcoming issue of Pro Se Presents Fantasy and Fear.
AP: As a writer, what influences have affected your style and interests the most over the years?  Do you have a particular genre/type of story you prefer to write?
CWR: Music and movies have had a huge influence on my style of writing. I tend to listen to a lot hard rock though not exclusively. I like horror movies, action flicks, historical and science fiction. I like anything with a unique twist and has a pulse, it’s gotta move for me to get into it. I think the main writers that have influenced me are Stephen King, James Clavell and Warren Ellis. What I write kind of fuses those three together on some level. I write a lot of paranormal adventure tales that range from immortal hitmen to werewolves to super heroes. That’s my comfort zone right there.
AP:  What about genres that make you uncomfortable?  What areas within pulp are a little bit intimidating for you as an author?
CWR: I think writing the hard sci fi stuff. I’m not too techno savvy so I don’t go that route very often.
AP:  What do you think you bring to pulp fiction as a writer?
CWR:  I think all writer’s bring their own perspective to everything they write. No one is going to tell a tale the way I do. I run heavy on physical drama, dark themes, psychologically I think the more complex the characters are the more engaging it will be for the reader.
AP:  You have a recurring character that is a part of the Pro Se Productions stable.  Can you tell us who Virgil is and where that idea came from?

CWR: Virgil is a hitman that made a deal with something very dark in the 1920’s. That thing gave him the power to resurrect himself should he ever die. Hitmen live a rather dangerous life to begin with but if one had no fear of dying you can imagine how the body count might go up. The problem is the entity that empowered him needs Virgil to keep killing. That’s the deal, kill for me and I guarantee you eternal youth and life. Stop killing for me and there are consequences. Virgil made the deal in haste when he was young and angry. It didn’t take long for him to regret the decision. The story takes place in the present in McQuade, Nevada where Virgil has just landed. It has been a long road and he wants out of the deal. His prey are as plentiful as ever. There’s a lot of backstory I flashback to which allows me to write in different time periods which helps keep things popping for me as the writer. Virgil has rather come full circle now as he is more frustrated than ever to be this otherworldly entity’s slave.

I came up with the character some years ago. He was originally a familiar of a vampire that kept his master chained and weakened in his coffin. Something to use as a food source and the familiar didn’t have to do any labor for his master, he could be his own man. I don’t recall how he made the jump from familiar to lazarus hitman but the original idea must have gotten tired to me and things built on one another and just evolved.

AP:  You stepped off into the ‘weird western’ arena with a story that will soon appear in the Age of Adventure anthology “Vampires versus Werewolves.”  Can you talk about that story, including the process of coming up with the concept and how you blended the two genres? 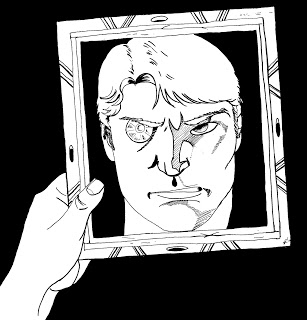 CWR: I watch a lot of discovery channel, national geographic and the like. One day there was a bit on shootists of the old west so I watched as I love a good western flick. Wild Bill Hickok was one of the subjects. I had heard of him and knew he was a fair shot but not to the degree that he is credited. Something about him struck a nerve and that lead me to reading up on the man. There is a point in his past where Hickok gets caught without his guns one night out in the wild. A bear attacks him and Hickok fights the animal off with a knife. That takes some stones, I don’t care who you are. So Hickok wins the fight but gets mauled pretty good because he needs down time in Rock Creek, Nebraska afterward.

For some reason, the idea of something other than a bear mauling him before showing up in Rock Creek hit me. What if it was a werewolf? The idea had merit, I thought. Wild Bill versus a werewolf? What isn’t fun about that? Seems like a fine way to test the gunslinger. Other elements were added later like the Philosopher’s Stone and a vampire but the wolf and Hickok were the nuggets that got my attention. I think werewolves are a natural fit for the old west. Vampires not so much as they have to hide from the sunlight. The Native Americans called the lupines skinwalkers so it’s built right into the time period. It was great fun to write and way out of my comfort zone. Liking western movies doesn’t mean you know how to write a western. It allowed me to stretch some muscles I didn’t know I had.

AP: You’re also an artist.  What work have you had published? 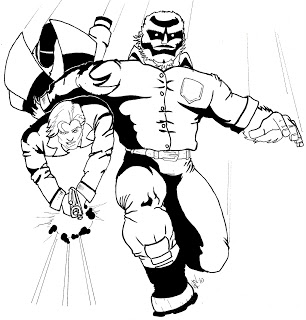 CWR: I sold a few tattoo designs recently and a piece to Pulp Works Press but the majority of my gigs have been coming from Pro Se Productions.
AP: What’s coming from CW Russette in the future? Any projects you want to discuss?
CWR:  Well I’ve got one book waiting on the desk of a major publisher that I’m hoping to get picked up. Been pondering a second book as well but that’s yet in the planning stages and I can’t talk about that. Virgil will be around for some time thanks to Pro Productions and I’ve a few more short story ideas in various stages of completion. I’d like to get back to some comic book scripting if I can find the right team.
AP:  CW, thanks for coming by ALL PULP and we hope we’ll see a lot more of you and your work!
CWR: Thanks for having me!
Share