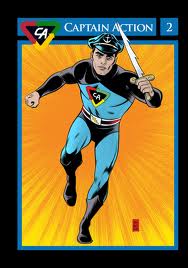 New York Comic Con was a bevy of action and a flurry of announcements erupted from said convention.  One announcement involved the future of CAPTAIN ACTION!  It was revealed that Mike Bullock, current writer of Moonstone’s BLACK BAT comic for Moonstone’s RETURN OF THE ORIGINALS comic line, will be taking up writing chores for the good Captain and team in CAPTAIN ACTION: SEASON THREE!

“I’ll be taking over the writing on the main Captain Action title beginning with #1 of season III that should hit shops later on in 2011,” reported Bullock in an interview with ALL PULP.  “Steven Grant, the writer for season II has done some really incredible things (wait until you read #3 & 4) and I’m excited to build off that for the future of the A.C.T.I.O.N. Directorate’s top agent.”
When asked what appealed to him about writing CAPTAIN ACTION, Bullock responded, “Once the Captain Action comics
started coming out through Moonstone, I really liked what they were doing and loved the premise of the character that Fabian Nicieza had
crafted. Then, when I got my turn to write a story with Cap (The Phantom/Captain Action miniseries) it really seemed like writing
Captain Action would be a lot of fun. He lands somewhere between James Bond, Big Jim and all my favorite superheroes mixed into a giant vat of little boy wish-fulfillment, which are all things right up my alley. So as you can imagine, I’m pretty jazzed to write this book.”