Green Hornet and Captain Action Team Up in Winter Special 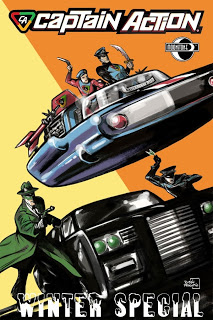 ·      Original Captain Action confronts a beautiful French Spy, a Communist Yeti and a 3,000 foot drop! Story by Beau Smith and art by Eduardo Baretto.
·      Lady Action stars in a fun-filled, pun-filled romp by Tony Lee and Reno Maniquis called “The Spy Who Snowballed Me”.
·      Khem, Action Boy’s Panther, is featured in another solo adventure. Story by Joe Gentile and art by Giovanni Trimpano.
·      Plus – For the first time ever, the Green Hornet teams up with Captain Action in a sizzling sixties showdown! This story is written by Matthew Baugh. The advertising copy urges fans to “Get your buzz” for this prose adventure featuring these two 60’s icons.
“Captain Action meets the Green Hornet in ‘Reflections in Green.’ says writer Matthew Baugh.   “Captain Action is assigned to take down an operation led by a Red Crawl controlled city official.  The problem: it’s the Green Hornet’s friend and confidante, DA Scanlon.” 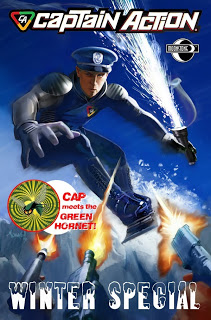 For all the latest on Captain Action, visit www.CaptainActionNow.com.
Information on Captain Action Comics can also be found at www.MoonstoneBooks.com
About Moonstone Books
Moonstone Books publishes comics and illustrated fiction from the Dark Side to the light, featuring classic and new heroes in thrilling tales of adventure, mystery, and horror. For more than a decade, Moonstone has created fine and distinct comic books, Graphic Novels and prose…books that are meant to be read.
About Captain Action Enterprises
Captain Action Enterprises, LLC is dedicated to creating new character experiences for both the collectible/nostalgia market and passionate fans of adventure toys and fiction through licensing, re-creations and creative innovations.  More information is available at www.CaptainActionNow.com.
They are exhibiting at booth #2380 at New York Comic Con.
Share