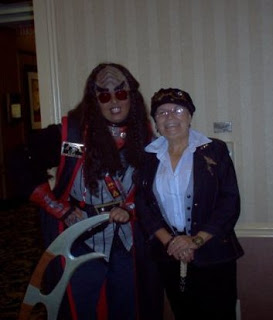 KGM: I can still remember my dad buying Batman comics and reading them to me, and my keen desire to learn to read them myself. One of my first loves was Jules Verne; I read 20,000 Leagues Under the Sea in 4th grade and my teacher kept asking me if I understood it. Well, certainly, though I admit I had to skip over some of the technical terms. Then I started on Andre Norton and Heinlein’s juveniles in 5th grade, and on to Robert E. Howard, H.P. Lovecraft, Talbot Mundy, Sax Rohmer, C. L. Moore, ERB…so many, many fascinating writers!

AP: How did you get your start as a pulp writer?

KGM: My tendency, when anyone says, “Can you write—”, I say, “Sure!” And since I’ve read so much pulp, it seemed a natural step to try writing some. When I was first starting to write professionally, I did some REH pastiches for Tom Johnson’s pulp magazines: Conan-ish, Solomon Kane-ish and Breckinridge Elkins-ish shorts. Tom liked my work and introduced me to Ron Fortier of Airship 27, who recently published the GIDEON CAIN, DEMON HUNTER anthology edited by Van Plexico, and Ron Hanna of Wild Cat Books, who publishes the STARTLING STORIES magazine where I’ve been lucky enough to have several shorts and novellas. Ron Fortier also got me involved with a Domino Lady anthology which ended up being released by Moonstone Books.

AP: There seem to be many different opinions about what can be defined as pulp. What do you look for in a pulp story as a writer and a reader? 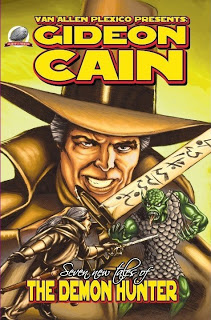 KGM: I think pulp is by definition adventure-and-atmosphere heavy and strongly plot-driven, with character a close—or sometimes not so close—third. That said, I do consider character to be of prime importance, especially as a reader. If I don’t care about the characters, why would I want to read about them? That, I think, is part of the appeal of long-running pulp characters: Doc Savage, The Shadow and the rest. The reader gets a feeling, almost, of family; I know I would love to have a meal or go on vacation with Doc and his Fabulous Five, listen to Monk and Ham argue, marvel at Johnnie’s vocabulary. The adventures of these characters are great, but really, what does the reader remember? An exciting trek in a submarine or why Monk named his pet pig Habeas Corpus?

AP: Where can readers find information on your books?

KGM: My website, which needs updating desperately:
And the one with my collaborator, Cynthia D. Witherspoon—we write urban fantasy and steampunk as Cynthia Gael—

KGM: I’m working with my collaborator, Cindy Witherspoon, on the aforementioned urban fantasy series called THE BALEFIRE CHRONICLES. Book one, BALEFIRE AND MOONSTONE, is available from Gypsy Shadow Publishing and at Amazon. Book two in the series, BALEFIRE AND LODESTONE, is done and we’ve started on book three. Under the Balefire umbrella, we’re also doing a series of steampunk novellas; the first one, BALEFIRE AND BRASS, is complete and under consideration. I’m also finishing up a fantasy and hope to do more pulp soon. 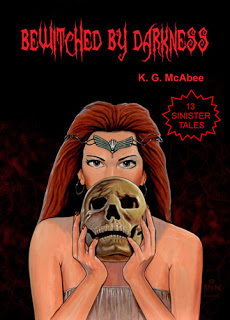 KGM: I’ll be a guest author at Pagan Pride Day in Clemson, SC on October 9. On November 2, I’m doing a NaNoWriMo kickoff in Woodruff, SC. I’m teaching creative writing classes in Asheville and Charlotte, NC, for

AP: And finally, what does K. G. McAbee do when she’s not writing?

KGM: Not writing? If I’m not writing, I’m thinking about writing. Seriously, though, I do try to spend as much time as I can writing, but I also read an enormous amount; I think it’s not only necessary for a writer but the most fun you can have. I also tutor English and algebra at two local community college branches, which is odd because I don’t have a degree in either; my degree, strangely enough, is in industrial electronics. But I’m with Heinlein; he said a human being should be able to do anything from diaper a baby to cook a meal to lead an army to colonize a planet; specialization is for insects. I’m definitely one of Heinlein’s Children.