1996
Cineville, Inc./Sony Pictures
Directed by Dan Ireland
Screenplay by Michael Scott Myers
Based on “One Who Walked Alone” by Novalyne Price Ellis 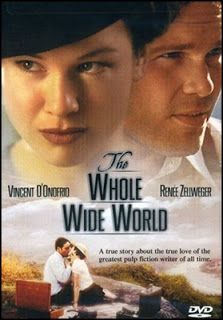 Here’s a wonderful romance movie that I think is wonderful for a couple to watch but it’s not exactly the first movie that would come to mind when you and your sweetie hit the Netflix for something cuddle up with.  But you really should give THE WHOLE WIDE WORLD a try.  Let’s face it; aren’t you guys tired of seeing “Ghost” over and over and over?
In 1933, Novalyne Price (Renee Zellweger) is an independently minded young woman living in rural West Texas who dreams of going off to college and maybe becoming a teacher.  She really aspires to be a writer.  She has these huge diaries she writes her daily activities in and has been sending off stories to the confession/romance pulp magazines with little success.  She desperately longs for someone to talk to about her ideas and stories and one day while sitting on her porch drinking lemonade, a friend of her drives up and asks her would she like to walk over to his car and meet the greatest pulp writer in the whole wide world: Robert E. Howard (Vincent D’Onofrio) 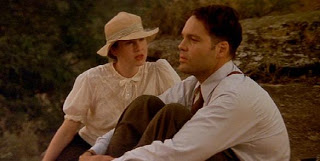 Robert E. Howard grew up and lived most of his painfully short life in and created what is probably the most famous pulp adventure character of all: Conan The Barbarian, the hero of short stories, novels, comic books and movies.  But Robert E. Howard created many more characters than that and wrote so prolifically that whole issues of ‘Weird Tales’ magazines were filled with his stories, written under half a dozen pen names.  Even today nobody is sure exactly how many names Robert E. Howard used or how many stories he wrote.  For me, when it comes to writing, Robert E. Howard has few equals when it comes to sheer storytelling power.  He wrote stories about lusty adventurers who spent their days hunting for treasure, fighting demons and roaming uncharted lands and spent their nights wenching, drinking and gambling.  There’s nothing but total testosterone in a Robert E. Howard story and it’s easy for me to understand why they were so popular during The Depression Era when so many men felt impotent and powerless.  After a hard day of trying your best to feed your family and keep a roof over their heads, for a man in the 30’s, picking up a copy of ‘Weird Tales’ and reading a Conan story where he kills a mad god and makes off with his priceless giant diamond is the equivalent to a modern day Joe Punchclock coming home from work and watching ‘24’ to cheer Jack Bauer kick terrorist scum ass and save The President from being blown up by a neutron bomb in his shower.
Novalyne is totally astonished at meeting someone who actually makes a living by writing and they begin a friendship that develops into a rocky romance.  Novalyne has a mind of her own and is ambitious with an independent spirit.  In that respect she’s somewhat more progressive than most of the other young ladies in the town but she’s never met anybody like Robert Howard who is socially inept and extremely close to his mother, who is in poor health.  When they go out on dates, Bob Howard prefers to take Novalyne on long drives where they can talk about the dreams and aspirations they have as writers.  As much as Novalyne grows to love Bob, she soon realizes that he’s not husband material.  Robert E. Howard is a wonderful man but he lives too much inside of his own head.  And while his incredible imaginative power and lust for life draws her to him, his emotional insensitivity and manic depressive moods drive her away.  They maintain their romantic relationship in a sort of on-and-off again basis but the real romance is between their imaginative minds and the love they both have of writing.
I really love THE WHOLE WIDE WORLD for number of reasons: first of all, while it’s not a straightforward biography of Robert E. Howard, we do get to see some very important moments in his life filtered through the eyes of Novalyne.  And there are some moments between Howard and his mother (Ann Wedgeworth) that are really touching.  You may remember Ann Wedgeworth as the sexpot neighbor on ‘Three’s Company’.  She does a really good job of acting here as Howard’s possessive mother who obviously loves her son a little too much.
The acting by Vincent D’Onofrio is first rate and convinced me that I was looking at Robert E. Howard in the scenes where he’s writing a Conan story and he’s speaking the dialog out loud.  There’s another scene where’s he’s walking down the main street of his home town, shadowboxing an imaginary enemy and mumbling descriptions of the fight that’s taking place as he works out a story in his head.  It’s made clear in the movie that Howard’s neighbors and friends think it’s pretty damn odd for a big grown strapping man such as himself to be making a living writing stories and talking to imaginary people in his head but D’Onofrio plays Howard with such an ‘I-Don’t-Give-A Damn-‘ charm he sells the performance.  Renee Zellweger is simply wonderful as Novalyne Price.  She understands Robert Howard.  She loves Robert Howard.  She thinks Robert Howard is the greatest writer in the whole wide world.  She just can’t allow herself to fall enough in love with him to marry him.  She’s smart enough to see that such a marriage would end in tragedy.

Novalyne Price went on to become a teacher and she wrote the book the movie THE WHOLE WIDE WORLD was based on after she grew angry at reading so many articles that she felt distorted the truth about what Robert E. Howard was like.
The relationship between Robert E. Howard and Novalyne Price is handled with a great deal of romanticism and sensitivity.  Robert continually amazes Novalyne with the places he takes her to where they gaze upon beautiful sunrises and sunsets.  These scenes also give D’Onofrio a chance to show off the stare he learned from Stanley Kubrick when we worked on “Full Metal Jacket” as Howard tells Novalyne about his stories and in the background we can faintly hear swords crashing together, the curses and yells of men fighting and the sounds of war which get louder and louder until Novalyne says something to snap him out of it.  The thing that really comes across in the movie is that in a lot of ways, both Howard and Novalyne were born out of place and out of time and even though they were lucky enough to meet, they still could not connect on a lot of levels.  It’s a really classically bittersweet love story.
It’s a great movie for lovers of the work of Robert E. Howard as I think it really gives fans of the man and his work a really good look at what his everyday life was like.  It also works as a movie about writers.  Movies about writers are really hard to do since most of the work takes place between their ears.  Fortunately, Robert E. Howard was as big as life as the heroes he wrote about and his life makes for an interesting movie.  I really enjoyed the movie just on that basis since I identify a lot with Robert E. Howard.  Like him, I have no illusions that my work is great art.  I just like telling a good story and Robert E. Howard was one of the best storytellers ever born.  Vincent D’Onofrio does an excellent job of showing Howard’s sheer exuberance and delight at just being able to tell a hell of a good story and I felt that deeply.
So should you see THE WHOLE WIDE WORLD?  Absolutely.  It’s a movie that works as a biography of one of the most influential and popular writers of all time.  It also works as a movie about writers and their internal lives and how they connect, interact and deal with others who are not in tune with those wavelengths writers are in tune with.  And it most definitely works as a romantic film as the relationship between Robert E. Howard and Novalyne Price is touching, sad, funny, and poignant and I freely admit that the last scene of the movie is one that had my eyes watering.  This coming Valentine’s Day rent THE WHOLE WIDE WORLD and watch it with a writer you love.
111 minutes