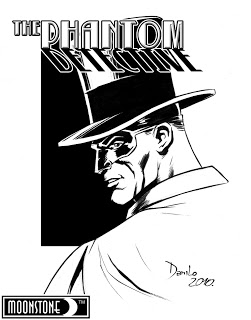 2.  In five sentences or less, The Phantom Detective’s origin is…?
Van Loan’s parents died when he was very young, leaving him heir to a vast fortune. He led a life largely devoid of direction until a dear friend suggested he help the police with a grisly murder case they were having difficulty solving. He found that he had a natural propensity for sleuthing, and thus the Phantom Detective was born.

4.  The Phantom Detective’s most recent appearance is…?
I could be wrong about this, but I don’t think there have been any Phantom Detective adventures since the end of the original run of the pulp stories back in 1953…I believe the final novel was “Murder’s Agent,” written by Norman A. Daniels.

6.  The 3 top villains the Phantom Detective has faced are…?
In the original run of Phantom Detective pulps, the Phantom had only one recurring villain: Clifford Boniface. Boniface will be returning to menace the Phantom in the new series as well, and he’ll be joined by a number of new villains of my own creation, including a nefarious illusionist known only as The Diabolist, and a mad scientist named Dr. Andrew Darke.

7.  The Phantom Detective likes…
A challenge, both physical and mental; driving a racecar; enjoying an Old Fashioned while playing pool with Frank Haven’s in his Clarion office.

9. Existing characters the Rook has met/had a crossover with include…?
The Phantom Detective has never had a crossover to date, but there are several planned. First up is a prose adventure with the Spider. 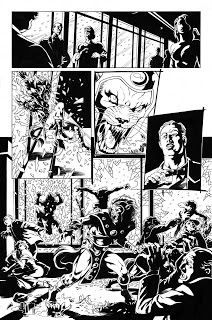 12.  If the Phantom Detective couldn’t be there to save the day, the person he’d pick to takle his place is…?
The Spider, one of the few other “mystery men” whom the Phantom trusts.

13 Free-for-all-Say anything, in ten sentences or less, you want about your character.  That would be…?
The Phantom Detective is one of the all-time great pulp heroes, and a character that helped to inspire many others in a number of other media, most notably comic books. It is a great honor and privilege to re-introduce him to modern audiences in both comics and prose, and to help the character to evolve and remain relevant. My goal is to make the Phantom Detective into a modern, cutting edge pulp hero unlike any other.