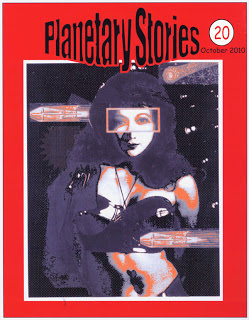 From Publisher Shelby Vick-
“Jerry Page, Bob Kennedy and I tossed around the idea of having our October issue be a Special Holiday Issue — then decided, “Nah — we’ll just see what comes along.”
What came along was a great group of holiday stories!  More, in fact, than we had in our distant Holiday Issue.
In reverse order, we start with Eugie Foster’s classic story about the origin of Chinese New Year — well-illustrated by Roy Coker.  Then Rob Shelsky flabbergasted us with some Christmas humor that should become a classic on its own.

Jim Griffin took an unusual step and wrote a short Christmas story about his Texas Ranger, Jim Blawcyzk.  To this point, the Ranger has only been in novels.

The Mountie is involved in a Christmas story, Erwin Roberts presents us with a Grant Rockwell story set in a past Thanksgiving, while the FutureTeam saves Thanksgiving turkeys for the universe, four burlesque girls who happen to be ghosts star in a Halloween trilogy, while the Diamondville Dolls are involved in their own trick’r’treating, and —
Well, I’m sure I’m missing some!
Some people might view “Cavern Wight” by Lane Harrison as revisiting a major controversy from the 1940s but the truth is, it’s just a lot of fun to read. It’s the first of a series and we hope you enjoy it.
We also have space opera!  Ron  Butler brings us another Rory Rammer story, Kirk Straughen gives us excitement, Richard Logan has his hero save a princess, Bob Brolin’s strange friend has an adventure — there’s even a Capt Puffin adventure.
Have fun!”
Share