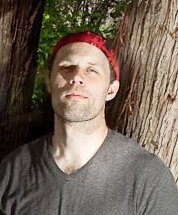 AP: Who is Joel Jenkins?
JJ: I’ll have a story addressing that question appearing in the upcoming The Gantlet Brother’s Greatest Hits book slated to be released next year through Pulp Work Press.  Some old enemies of Matthias Gantlet go gunning for him and they figure they can get to him through the writer that’s been chronicling his adventures. This story is inspired by a couple of real life occurrences.
AP: You’ve had a long love affair with Pulp.  How did it start?
JJ: When I was eight or nine I did janitorial work on Saturdays at a downtown office.  On lunch I’d go get a triple scoop ice cream cone for 65 cents and I’d finish it off while I was walking to the end of the town with the bookstores.  There was a new bookstore and a used bookstore within a couple blocks and I discovered Tarzan, Conan, Doc Savage and a myriad of other pulp era stories in those establishments.
AP: And how did that evolve into what you write today?
JJ: More than any other writing style, I enjoyed the fast-paced action and unfettered imagination that burst out of the pulp age.  I try to incorporate both of those things into my own work.  Character development and plot shouldn’t slow a story down, they should help move it along.
AP: And while we’re on the subject; what do you think about Pulp today?
In the 1930’s pulp fiction had a reputation for pushing the envelope, but most authors used some subtlety and restraint. Eighty years later almost anything goes and so some authors proclaiming to write pulp-style fiction lack the finesse (or the desire) to make their stories accessible and acceptable for reading by both youth and adults.  I started reading pulp stories at age eight and I sometimes have children between the age of eight and twelve approach me and tell me that they enjoyed one of my novels.  This being the case I prefer to leave some things as subtext so a more perceptive reader might pick up on them, but it won’t interfere with a youth’s enjoyment.
JJ: However, there is some great pulp being published today that it is accessible to both young and old.  A lot of the Clive Cussler stories fit into this category and he’s had great success, and Airship 27 puts out a great line of books reviving old and sometimes forgotten pulp characters with modern writers.  There are a number of other small presses putting out pulp-style books and Rage Machine puts out periodic issues of Dark Worlds magazine which focuses on pulp-style stories of all genres.
AP: You ran a website for a long time devoted to Pulp called ELECTRONIC TALES.  Tell us about it.

JJ: I was one of the pioneers of the e-serial, where authors sent out stories a chunk at a time, via email, to a mailing list of readers.  Five times a week I sent out a page or two of story that usually ended in a cliffhanger of some sort.  At one point the mailing list was over 2,600 readers.
This was a lot of fun and forced me to get a lot of writing done.  However, like many companies in the internet boom there wasn’t enough revenue flow to keep it going indefinitely.  It did seem to make an impact, though, since one storyline was lifted wholesale and converted to be used in a major motion picture franchise—not that I ever saw a penny of royalty money.
AP: Tell us more about your Pulp inspired works.
JJ: One pulp-inspired fantasy series that doesn’t get as much play as some of my other works is the City of Bathos series, which includes Escape from Devil’s Head and Through the Groaning Earth. These draw from a Howardian influence, but really that’s just the starting point.  I mix in an unhealthy dose of well-founded paranoia and Lovecraftian elements, and tell the stories of various denizens of the city.  Mostly these arre just folks trying to survive the best they know how, but their agendas are much different and when their paths cross nasty things are bound to happen.
The first book is written from the perspective of insiders—people intimately familiar with the city of Bathos.  The second book, Through the Groaning Earth, focuses more on outsiders who have been shipwrecked on the reefs outside Bathos and on a handful of characters from the previous book that thought they had escaped Bathos’s pervasive influence and discover how wrong they are when the long-reaching hand of the Assassins Guild follows them to their haven.
AP: Before we get into THE SEA WITCH, tell us about Max Damage and Damage, Inc.
JJ: Olympic hopeful Max Damage inherits his father’s company, Damage Inc, when he receives news of his father’s untimely demise. He finds the books a horrible mess and begans secret compartments and secret company projects.  When a long-legged Russian woman breaks into the office one night looking for information on one of those projects Max realizes he’s in over his head.
AP: What fascinates you about Max Damage?
Max is the anti-Doc Savage.  Doc Savage is the pinnacle of human mental and physical achievement.  Max has many amazing abilities but for every outstanding ability he has a drawback.  He possesses amazing strength and musculature but he has to eat like a horse to maintain his physique.  He has amazing eyesight but his ocular nerve is so sensitive that bright light effectively blinds him.  He can withstand extraordinary amounts of pain, but his sense of touch is blunted.  He has a photographic memory but is dyslexic. 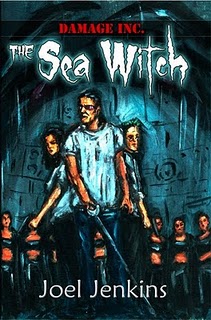 AP: So why should we read THE SEA WITCH?
JJ: Primarily for an action-packed read with a trio of misfits as the heroes.  Secondarily, pulp fans might find Max Damage an interesting twist on the superhero archetype.  In no way, however, is this a parody of pulp.  I love the pulp esthetic and incorporate it into nearly everything that I write.
AP: How many stories have you written about Max Damage? What future stories have you got in mind for Max Damage and Damage, Inc.?
JJ: There is of course, the recently released Sea Witch novel.  I’ve also written a pair of novellas called The Sun Stealer and On Wings of Darkness.  Sometime in the next couple of years I hope to make that a trio of novellas and release them in a combined package.  The third story is tentatively titled The Madagascar Hole and will involve prehistoric fish and The Fountain of Life Foundation.  At some point there also may be a cross-over story with Derrick Ferguson’s Regency character.
AP: While we’re got you trapped, tell us about DIRE PLANET.
JJ: American astronaut Garvey Dire is marooned on Mars and while he is wounded and running out of oxygen he sees a repeating vision of a beautiful and strangely-alien woman crossing through a moss-covered structure.  When he interferes with the vision a time loop tosses him into the past and he finds himself in a Mars peopled by savage tribes, beautiful warrior woman, and dark-winged fiends that own the night skies.
This is my homage to Edgar Rice Burroughs, though it is not a pastiche in any way.  This Mars stands on its own and I’ve spent many hours developing its culture and etymology.  There are currently three published Dire Planet novels: Dire Planet, Exiles of the Dire Planet, and Into the Dire Planet.
Strange Gods of the Dire Planet is slated for a 2011 release and Lost Tribes of the Dire Planet is slated for a 2012 release.  I’ve currently finished a draft of Strange Gods and am about 85,000 words into Lost Tribes.
AP: What’s a typical Day In The Life Of Joel Jenkins like?
JJ: It starts at 5 AM and is very, very busy.
AP: What one thing of yours should we read right now?
JJ: Check out my blog at JoelJenkins.com or visit Amazon to pick up my novels in hardcopy and a number of them are also available in Kindle format. My stories are also available in a variety of electronic formats at Fictionwise.com.  Barnes and Noble also carries my books (It looks like they’ve currently got The Sea Witch at only $7.88, which is a 28% discount!) and many of the novels are available for the Nook.
Share