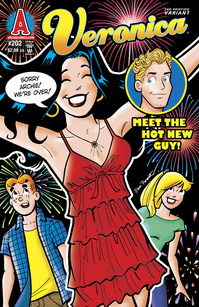 Archie Comics’ Kevin Keller– the first openly gay character in Riverdale– has been welcomed enthusiastically by Versace, the New York Times, and fans from every corner of the world. To celebrate the sold out first printing of Kevin Keller’s debut issue, Veronica #202, Archie Comics is going back to the press for a special limited edition variant cover print run.

“We never thought Kevin Keller would become so hot so fast!” exclaimed Archie Comics Co-CEO Jon Goldwater. “It’s been a thrill to see how well people have welcomed Kevin into their lives. His introduction was always just about keeping the world of Archie Comics current and inclusive. It just made sense at the time and we couldn’t be happier to have such widespread and enthusiastic support behind Kevin’s continued presence at Archie Comics!”

Kevin’s limited edition variant cover issue of Veronica #202 will be available through ArchieComics.com and in comic shops beginning October 6th and in limited quantities at the 2010 New York Comic Con taking place October 8-10.