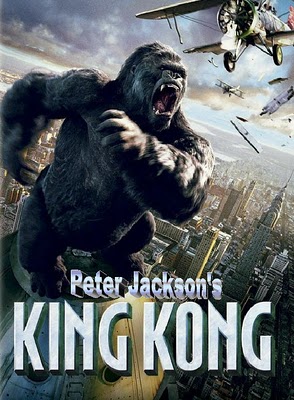 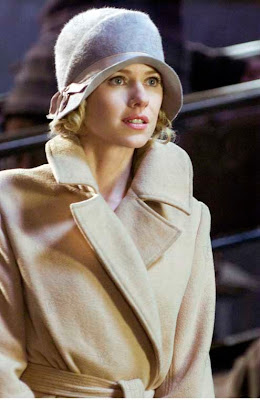 The performances are stellar. I’ve never been much of a Jack Black fan (I still don’t see what the fuss over “School Of Rock” was all about) but I really enjoyed him in this movie. He has nowhere near the energy of the original Carl Denham, (the late great Robert Armstrong) but he has a strange look in his eye that I think develops into full-blown madness during the movie’s most frightening scene where Denham, Jack Driscoll and several crewmen are at the bottom of a deep crevice and have to desperately battle for their lives against giant insects. The choice of Jack Black and Adrian Brody as the movie’s leading men is a good one since both of them look like….well, like regular guys. They’re not impossibly handsome or pretty (I’m looking at you, Orlando Bloom) and that goes a long way with me to lending realism to their characters. As Ann Darrow, Naomi Watts has to carry a lot of the movie on her shoulders since she interacts with Kong more than any other character in the movie and she pulls it off superbly. There’s a terrific scene where she goes into her vaudeville act to amuse Kong and amazingly, the big ape enjoys the show. And for me the most spectacular action sequence in the movie is the ultimate giant monster smack down where Kong proves exactly why he’s King when he takes on not one, not two, but three Tyrannosaurus Rexes in a truly epic showdown of colossal proportions.
Chances are most of you reading this have already seen KING KONG so I don’t have to sell you on it. But if by chance you haven’t yet seen it, by all means put this one on your Netflix list. KING KONG is a rare animal: a remake that is more than worthy to stand shoulder to shoulder with the original. It’s totally everything that I love about the movies. Enjoy.
187 minutes
Rated PG-13