I don’t think we really need to introduce Joss Whedon. But just in case, he’s the creator of shows like Buffy the Vampire Slayer, Dollhouse, and Firefly – not to mention that just yesterday he officially became director of Marvel’s The Avengers.  He took the stage at San Diego Comic-Con today for the “Joss Whedon Experience,” where thousands of his closest friends gathered to ask him questions without even a moderator between them. Thanks to Marisa Roffman over at Give Me My Remote and her live coverage of the panel, here are some highlights after the jump… and thanks to ecsmith34, we’re getting video. 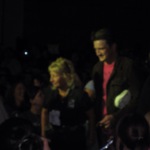 And that, as they say, is that. Stay tuned to ComicMix for more on Whedon and The Avengers and more SDCC updates.