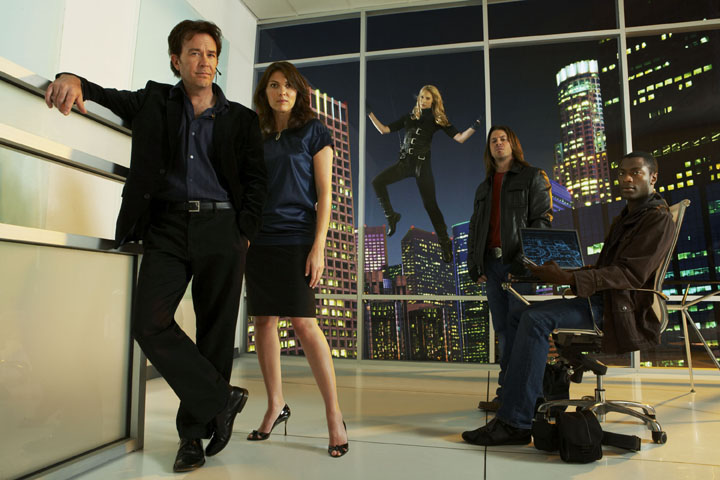 Over the last year or two, the more engaging dramatic series have been popping up on TNT, USA and even AMC. They run from the gravitas of[[[ Mad Men]]] to the lightweight entertainment that is [[[Psych]]]. An increasing proportion of my viewing time seems to be focused on these networks and I’m happier for the variety.

for TNT, a show about criminals banding together to do good. Starring Timothy Hutton and a fine ensemble, the series debuted to terrific reviews and strong ratings in December 2008. Those first 13 episodes were collected on DVD just before the first half of the second season arrived in July.

TNT kindly provided us with the first two episodes of the second half season, which debuts tonight at 10 p.m. Spoilers ahead…

When last we left the team, Sophie had begun to question her place on
the team especially since she and Nate keep clashing over the missions
and their feelings for one another. She left the team to reconsider her
role (and also allows a maternity leave to Gina Bellman). Not wanting
to leave everyone in the lurch, she called in a marker owed her by
Tara, recurring guest star Jeri Ryan. As one can imagine, earning the
team’s trust was an issue in her first appearance and continues as the
series returns with “[[[The Runway Job]]]”.

There’s a nice recap via
an exchange between Sophie, Eliot (Christian Kane), Parker (Beth
Riesgraf), and Alec (Aldus Hodge) then we dive into a story about a
Chinese sweatshop run by a woman with visions of being a top-notch
fashion designer. The team way too easily plays to her vanity with Nate
and Tara using stereotypically broad accents. Still, the issues of
trust between the players are nicely handled in a script from series
producer Albert Kim and watching Parker on the runway is a delight.

The
second outing, “[[[The Bottle Job]]]” is a stronger offering from
screenwriter Christine Boylan and will mark Jonathan Frakes’ fourth
outing as director. Here, the bar where Nate grew up, the one he
watched his father ruthlessly run his numbers operation, is now in the
hands of the grieving daughter of McRory. Worse, on the night of her
father’s wake, a loan shark comes to collect either his money or the
bar. With just two hours to work with, Nate asks the team to help him
take down the loan shark. The episode is filled with strong themes
about family, about Irish loyalty, and cultural ties. The scam is
straight out of [[[The Sting]]], but is clearly in second place to the
character bits. Events also force Nate to do something that I suspect
places him on a slippery slope for the remainder of the season.

All
the characters are now well-established and its time to get deeper into
all of them. Parker’s somewhat sociopathic tendencies make her
fascinating and Riesgraf does wonders with the material and deserves
more. Eliot and Alec could also use some depth now and we see glimpses
of that in the opener. Ryan is at her most playful and sexiest as the
grifter and is a welcome substitute but Bellman is missed.

The
remainder of the season, running through February 17, builds up to a
climax that challenges the entire team. We’ll see the omnipresent Marc
Sheppard back for a return appearance, along with Nate’s ex-wife (Kari
Matchett).